Jarno Smeets claims to be a mechanical engineer from the Netherlands who's attempting to build a machine (Human Birdwings) to let people fly with flapping wings like a bird. It's not human-powered, per se. As you can see in the video, Jarno flaps his arms, and his arm motions are read by a Nintendo Wii controller and an Android smartphone which interprets them into mechanical commands. That's the theory, anyway.

Is this fake? It seems to be. Wired did some digging into Smeets' background, and basically everything he said he did before the human birdwings project (attending Coventry University, working at a variety of jobs) is fake. No one has heard of this guy. Plus, the human birdwings site is registered anonymously, which is always a suspicious sign.

So the question is -- who's really behind the human birdwings site? Is this a viral marketing campaign?
(Thanks Joe and Alejandro!) 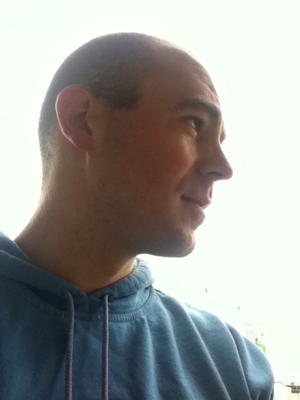 Update (3/22/2012): More details about the human birdwings hoax emerged today. Turns out it was a "media art project" put together by Dutch filmmaker Floris Kaayk in collaboration with production company Revolver. "Jarno Smeets" was a fictional character. They admitted the hoax on the Dutch TV show Wereld Draait Door. link: foxnews.com

Suspicions: Here's a a picture of a ballpoint sketch of the device. My question is: This looks like an early prototype drawing. Jarno is Dutch. Why do the notes in English at this point?