Hidden away in a building at the Rochester Institute of Technology is a little-known marvel called the "Escherian Stairwell." It seems to defy the laws of physics, because when you walk up it, you arrive back at the same place where you started. Don't believe me? Just watch this video from RIT's "Can You Imagine" series in which it was featured. 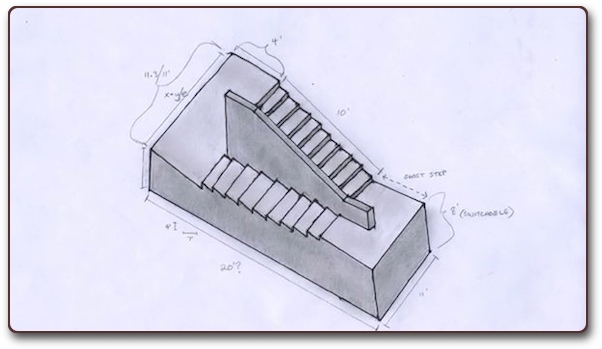 Okay, so maybe the Escherian Stairwell is not a real thing. The real story here is that the video about it was created by Michael Lacanilao as an attempt to create a "modern myth." To get people believing that something impossible (such as an infinite loop stairwell) could actually exist.

Lacanilao hoped to expand the video into an even longer documentary about Rafael Nelson Aboganda, the (fictitious) architect who supposedly designed the stairwell. He ran a KickStarter campaign last year to raise funding for this project, but unfortunately the campaign didn't reach its funding goal.

But we still have the "Can You Imagine" video, and apparently it's fooled quite a few people since being uploaded to YouTube. Linda Besner, writing for Hazlitt, reports that, "[Lacanilao] had thought that people would see the video and be taken in for a maximum of 15 seconds before rational thought set in. Over the summer, he was taken aback by the flood of pilgrims showing up demanding to see the stairwell. “One couple was really, really angry. She told us that during her trip with her boyfriend they were arguing in the car about who would do the stairwell first. And they were both kind of scared like, 'No, you do it first, No, I don’t know if I want to do it first.'"

'Rational thought' lol. There are far too many people out there who want to believe everything they are shown as long as it confirms their unsubstantiated beliefs. Far too many.
Posted by Mr R  on  Wed May 07, 2014  at  01:18 AM
@Mr.R And so what does atheism have to do with some guys video hoax? Or are you just comparing one hoax to another?
Posted by Mary Alice Martinez  on  Sat May 09, 2015  at  02:06 PM
@mary surely you meant to say religion. santa clause for adults!
Posted by Mary Alice Martinez  on  Mon Jun 29, 2015  at  09:09 AM
Yeah, angry is right. People don't like to be fooled. Yes, we do believe there are things past casual understanding, and that is what makes life intriguing. What about religion? Is that about rationality? No, it's about faith in something beyond the "reasonable." So, darn tootin, lots of folks get angry about hoaxers, because that creates the false leads that have to be weeded out to get to anything of real value that might be beyond the ordinary...........
Posted by Scott Davis  on  Thu Nov 02, 2017  at  05:15 PM
Commenting is not available in this channel entry.