After Justin Bieber reportedly looked at a few houses in the Buckhead community of Atlanta, Georgia, a group calling itself the Buckhead Neighborhood Coalition formed to protest him moving to the area.

And since the media loves to cover anything related to Justin Bieber, the protest group was soon making headlines, reported on by the BBC, CNN, Daily Mail, Time, Atlanta Journal Constitution, etc.

Harold White, leader of the group, told CNN: "We're concerned he'll bring the wrong type of element into a quiet, residential area. It is our position that a person with his means could certainly find a neighborhood more suited to his eclectic lifestyle."


As a community here in Buckhead, we have worked hard to achieve our goals and get to where we are. Justin Bieber's relocation to Atlanta can be nothing but bad for our children, as well as the community. Some can't even let their children play in the driveway without fear; he has raced vehicles under the influence, before. What's to say he won't do it again? As a home owner down the street from this residence, one can assume many people will be contacting real estate agents soon enough. 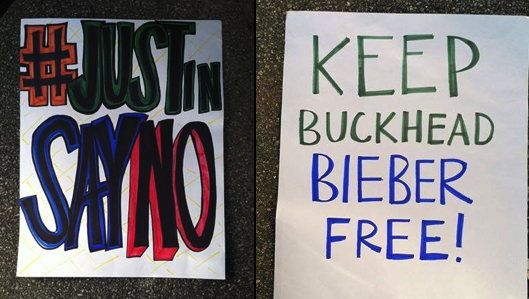 When asked if the protest was excessive, given that Bieber hadn't actually bought a house in Buckhead, White replied: "This is sort of a warning to say 'We don't need you here we don't want yellow Lamborghinis driving around our roads at 90 miles an hour'."

The coalition staged a rally Monday in front of an on-the-market mansion.

But after the rally, an Atlanta morning show called The Regular Guys, broadcast on Atlanta station Rock 100.5, admitted that the protest was actually an elaborate joke engineered by them. The "protesters" were interns at their show. And 'Harold White' was actually one of the Regular Guys hosts, Tim Andrews.

An accidental victim of the phony protest was former Atlanta mayor Sam Massell, president of the Buckhead Coalition, which is a genuine neighborhood group, totally unaffiliated with the faux Buckhead Neighborhood Coalition. He had been receiving hundreds of phone calls from the media, inquiring about the Justin Bieber protest, about which he was entirely clueless. [link: accessAtlanta.com]