The Bogus Inheritance of Jean Naccarelli

On August 31, 1959, a remarkable human-interest story hit the news wires and ran in papers throughout the United States. Jean Naccarelli, a 46-year-old Pittsburgh housewife, had learned that she had inherited $2 million from a wealthy uncle named John Lennon who had lived in Aberdeen, Scotland. She had received the news via a cablegram sent from Scotland by her two aunts.

The 78-year-old Lennon, Naccarelli explained to the press, had been a famous ship designer who had worked on the Queen Mary. He was her father's brother. She had met her uncle only twice, once in 1924 when she visited Scotland and a second time in 1952 when he came to Pittsburgh. Nevertheless, she was the sole heir listed in his will.

But what added a tragic twist to Naccarelli's story was that she wouldn't be able to enjoy her new fortune for long because she had been diagnosed with cancer and was predicted to be dead within a year. She said bravely, "I think I'm going to have a big funeral." 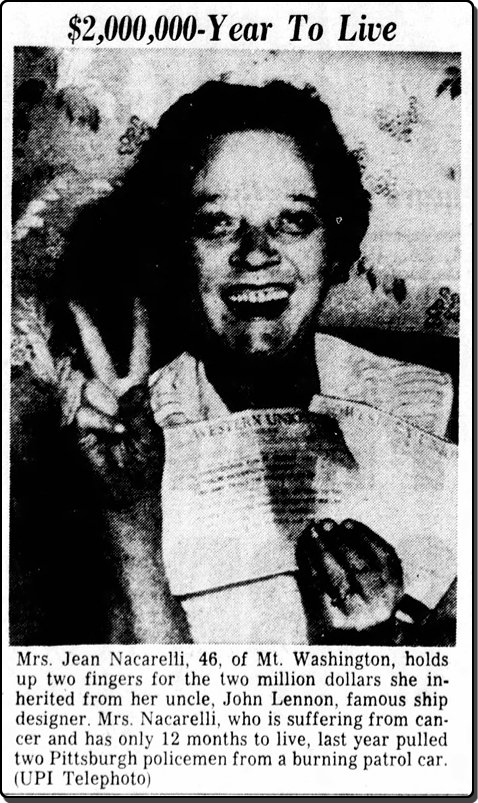 This wasn't the first time Naccarelli had been in the news. The articles about her inheritance noted that back in July 1957 she had been hailed as a heroine after saving two police officers from a burning car. The mayor of Pittsburgh had awarded her a special commendation for her bravery.

And Naccarelli reminded reporters that her fame went even further back. In 1932, she told them, she had won the Miss Pittsburgh beauty contest when she was still known by her maiden name, Jean Lennon.

As for her family life, she was happily married to an Italian-American cement contractor named Felice. She had two daughters by a previous marriage. One, she boasted, was a doctor at Johns Hopkins in Baltimore and the other was a nurse.


Doubts Emerge
Within a day of the story about Naccarelli's surprise inheritance running in papers nationwide, doubts about it began to emerge.

The United Press International bureau in Pittsburgh received a message from its office in Scotland informing them that no one named John Lennon had died recently in Aberdeen. Also, John Brown, Ltd., the firm that had helped design the Queen Mary, said they had never employed anyone by that name. The wire service passed this information on to newsmen.

Reporters then checked with Western Union which disclosed that the cablegram sent to Mrs. Naccarelli hadn't come from Scotland. It appeared to have come from Pittsburgh.

Naccarelli had hired an attorney, Howard Eulenstein, to help her handle all legal matters regarding her inheritance, and so it was Eulenstein who responded to the questions raised by reporters. He conceded it seemed possible that his client might be the victim of a "monstrous joke." He also revealed that Naccarelli and her husband had been about to leave for Scotland, but had canceled their flight after learning of the possible deception.

Although Naccarelli portrayed herself (through her lawyer) as the victim of a joke, suspicion fell on her as reporters discovered more discrepancies in her story.

It turned out that she didn't have cancer. When asked about his wife's fatal condition, Felice Naccarelli said that the only thing he knew was that doctors had diagnosed her with a "bad liver."

Also, Jean Naccarelli (née Lennon) hadn't won the 1932 Miss Pittsburgh beauty contest. It had been won by a young woman with the same last name, Marguerite Lennon. The two were unrelated.

Jean did have two daughters, but they were neither a doctor nor a nurse, as she had claimed. They were living with their father in Pittsburgh.

Her daughters disclosed that there really was an Uncle John Lennon in the family, but he had died several years ago, and he hadn't been rich.

Her daughters also noted that their mother had been known, on occasion, to send telegrams and flowers to herself. But when asked if his wife had sent the inheritance telegram to herself, Felice Naccarelli only said, "I don't know."

Despite her husband's profession of ignorance, it was by now apparent that Jean Naccarelli must have been the source of the telegram.

But how had Naccarelli's bogus claim made it into the national press? Investigation revealed that news outlets had received word of her story as an anonymous tip telephoned in. So on the basis of this, and the word of Mrs. Naccarelli alone, reporters had sent a story out over the national wires. They had been taken in by an attention-seeking hoaxer. Fact checking, which would have prevented the story from ever seeing the light of day, had only been done subsequently.


Naccarelli's Past and Possible Motivations
But what about the report that in 1957 Naccarelli had saved two policemen from a burning car. Was this true, or was it just another of her lies?

Given her demonstrated economy with the truth, one might suspect another hoax. However, this story actually was true.

Newspapers in 1957 did record that she rescued two policemen from a burning car. As reported in The Pittsburgh Press - Aug 8, 1957:


Mrs. Naccarelli earned the City's gratitude July 23 when she and her husband arrived at the scene of an accident in which a police car had collided head-on with another vehicle on Josephine Street.

The crew of the car — Patrolmen William Kunic and Andrew Aul — slumped unconscious in the front seat of the car which had begun to burn.

Before her husband could bring his car completely to a halt, Mrs. Naccarelli hopped out and ran to the burning auto. She dragged both men from the car and then used a pair of wire cutters from the tool box to cut the ignition wires and halt the flames.

That done, she returned to the officers and administered first aid until an ambulance arrived at the scene.
The details of the rescue sound almost too good to be true. Nevertheless, the police officers did identify Mrs. Naccarelli as their rescuer, and the mayor awarded her a special commendation for her bravery. So we have to assume that all this really happened. 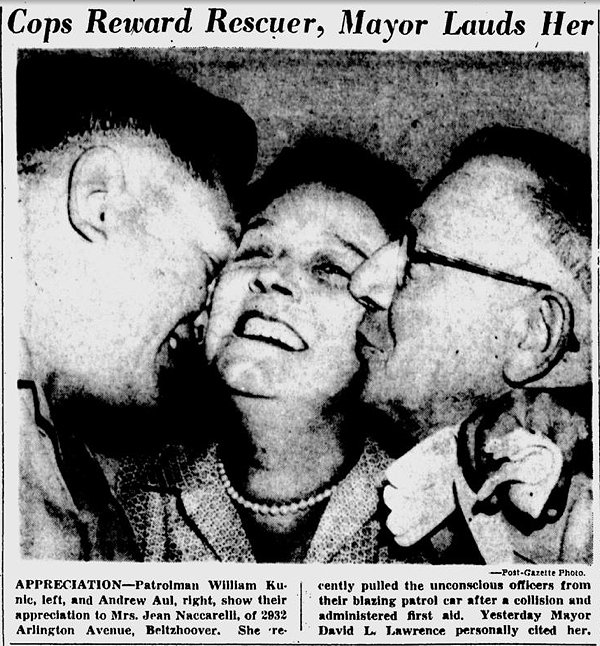 And what about Naccarelli's past before the 1957 incident? There's not much information about her before 1957. As already noted, she hadn't won the 1932 Miss Pittsburgh contest. She wasn't even a contestant. The only time her name appeared in the news was in June 1937 when she took the stand in a bigamy case. 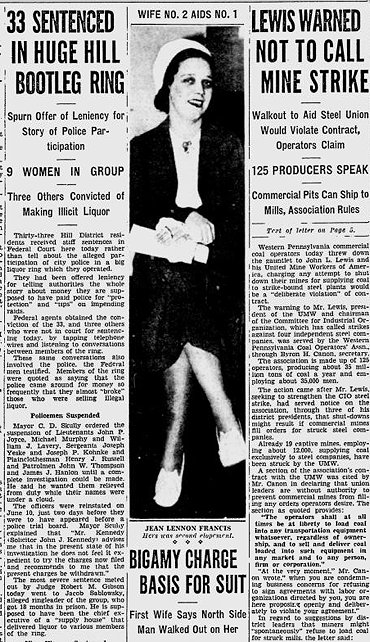 It seemed that her husband at the time, Roy Francis, had left his previous wife without bothering to properly divorce her. Which meant that he was now married to two women. However, the case was settled amicably when the judge granted Francis a divorce from his first wife.

From 1937 to 1957, Jean Naccarelli lived a quiet life, without getting her name in the news. But after saving the police officers in 1957, something changed. Her name became a regular feature in papers.

In June 1958, the Pittsburgh Post-Gazette reported that the "woman who saved two cops" had just learned that she only had three months to live. The cause of her imminent demise wasn't specified. The paper heard of her condition via a "friend" of hers. It's not too much of a leap to assume that "friend" was Mrs. Naccarelli herself, phoning in a tip to a reporter. 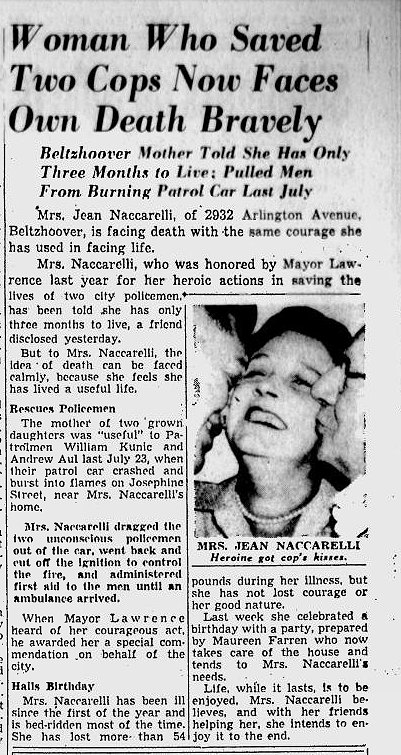 Two months later, in August 1958, Mrs. Naccarelli was dramatically saved after her home caught fire. It seems that she was confined to her bed because of a leg broken in a recent fall (no mention was made of her fatal condition) when her house caught fire. But luckily an army private, Elbert Burkes, who just happened to be passing by noticed the flames, rushed in to the house, and saved her from her 2nd-story bedroom. The private then ran back into the home and rescued her two pet dogs and parrot. The papers noted the poetic justice of the woman who "once saved police, now gets saved."

Damages were estimated at a mere $3500. Given Mrs. Naccarelli's character, the fire seems suspicious. Did she set it herself in order to get her name back in the papers? It's a possibility.

Whatever the case may be, she was back at center stage next year with the faux story of the inheritance.

The pattern that emerges is of a woman desperate for attention. Perhaps this craving for attention was triggered by the public praise heaped on her after her 1957 rescue of the policemen. She must have enjoyed the sense of being a local celebrity and sought for ways to return to the spotlight. If she lived nowadays, she probably would have tried to get her own reality TV show.

However, Jean couldn't have been completely lying about being sick, because she died in 1965, five years after earning infamy as a hoaxer. At the time of her death, she was only 51 years old (give or take a year, because there's some uncertainty about the date of her birth). She was buried in Pittsburgh's Homewood Cemetery.

Man. the fact that she didn't make up the story about the cops makes this whole thing very, very interesting. without that it would just be another story about a pathological liar.
Posted by zequi  on  Thu Sep 25, 2014  at  02:49 PM
Commenting is not available in this channel entry.