Back in April 2012 I posted about the Dream Park El Janoob Zoo in the Gaza Strip, which was displaying taxidermied animals, because it couldn't afford living ones.

Now we have the People's Park of Luohe in Henan, which has been thinking along similar creative lines. Instead of a lion in the African Lion cage, they've got a Tibetan mastiff dog in there. It does look vaguely similar to a lion, if you squint. However, it barks. Other substitutes include two rodents in the snake's cage, a white fox in the leopard's den, and a common dog in the wolf's pen.

But this isn't being done because of a lack of funds. The zoo explains that the actual animals have been sent to a breeding facility and swears they'll be back soon. And in the meantime, they promise to change the signs outside the cages to more accurately represent what's actually on display inside of them. [South China Morning Post] 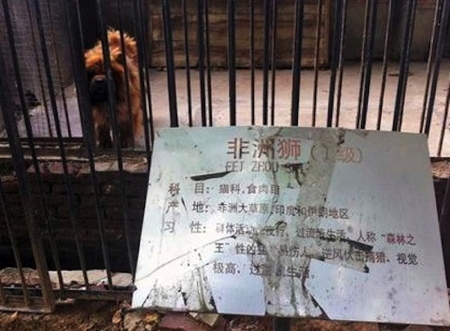