BBC News has delved into the mystery of "penis captivus," aka "cohesione in coitu," aka couples getting stuck together during sex. It tries to determine whether this can really happen, or whether such reports are just an urban myth. 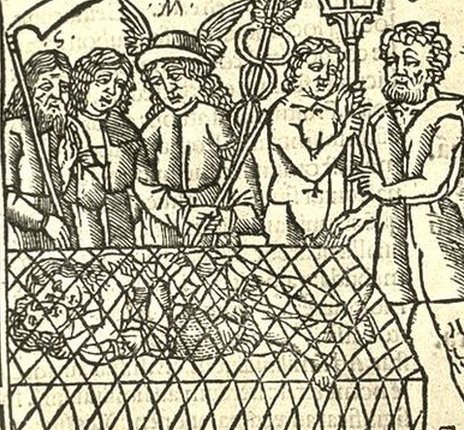 According to legend, the gods Mars and Venus once got stuck together, as depicted in this 16th century woodcut by the artist Raphael Regius
Dr Aristomenis Exadaktylos of Switzerland, in a recent radio interview, declared it to be an urban myth. But other doctors aren't so sure. Dr John Dean, a "senior UK-based sexual physician," says that it's a rare phenomenon, but insists it can happen. Although he hastens to add that it's a problem that usually resolves itself within a few seconds as muscles relax.

However, most reports of the phenomenon are highly anecdotal and seem to be more myth than reality. For instance, the BBC offers a description of a 1372 case in which the problem supposedly lasted an entire day... a claim that stretches credibility:


In 1372, Geoffrey de La Tour-Landry related how a voluptuary named Pers Lenard "delt fleshely with a woman" on top of an altar of a church, and God "tyed hem faste togedre dat night". The following day the whole town saw the couple still entwined "fast like a dogge and biche togedre". Finally prayers were spoken and the couple's prolonged intercourse came to an end (although they were obliged to return to the church on three Sundays, strip naked and beat themselves in front of the congregation).

Accounts of the phenomenon also often mix in a moral message by suggesting that the problem only afflicts adulterers, because the fear of detection strengthens the force of the woman's muscular spasm. So "Recent media reports of penis captivus - in Kenya, Malawi, Zimbabwe and the Philippines - all concern adulterous couples." The notion that the problem is somehow a punishment for adultery is, of course, nonsense.

Finally, what would be the medical treatment for this problem? The 17th Century Dutch physician Isbrand van Diemerbroeck offered cold water as a cure:


"When I was a student at Leyden there was a young Bridegroom in that Town that being overwanton with his Bride had so hamper'd himself in her Privities, that he could not draw his Yard forth, till Delmehorst the Physician unty'd the knot by casting cold Water on the Part."

If cold water doesn't work, chloroform historically seems to be the next most popular solution. But I assume any muscle relaxant would remedy the situation.

That sounds like a particularly interesting sort of himphamp tale to me!