In the past two weeks, various blogs have been reporting that "strange metal boxes" have been washing up on beaches in Oregon, Washington, and northern California. In some versions of the reports, these boxes make humming and screeching noises, are seamless, and can't be moved, even by trucks. The boxes are said to have appeared after UFO sightings. 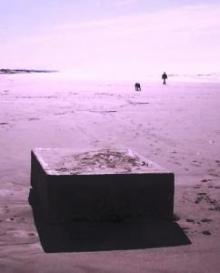 However, reports are now coming in that people have gone searching for these boxes, to examine them for themselves, but haven't been able to find anything. And it looks like the entire "strange metal boxes" story traces back to two articles posted by a Dave Masko. Perhaps the boxes only existed in his imagination.

Wasn't there a Doctor Who episode recently where aliens invade by dumping strange black boxes that don't do anything all over the planet?

Those were smaller and more numerous, though.
Posted by MugaSofer  on  Tue Nov 06, 2012  at  03:58 AM
Commenting is not available in this channel entry.