Sponge-Throwing Painters of the Ancient World

An ancient legend described the role of chance in art — a sponge flung in anger at a canvas accidentally produced the exact effect a painter had been striving for. 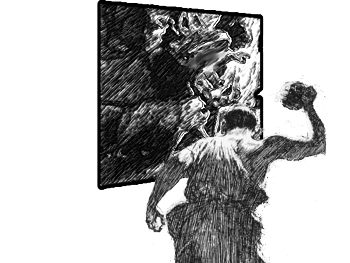 Pliny the Elder (23-79 c.e.) told the story of the Greek painter Protogenes who spent seven years working on a painting of the hero Ialysos with his dog. During this time he only ate beans, so that his artistic faculties wouldn't be blunted by over-indulgence. However, one aspect of the work eluded him. Try as he might, the foam coming from the panting dog's mouth didn't look right.


Chafing with anxiety, for he aimed at absolute truth in his painting and not at a makeshift, he had wiped it out again and again, and changed his brush without finding any satisfaction. At last, enraged with the art which was too evident, he threw his sponge at the hateful spot, and the sponge left on the picture the colors it had wiped off, giving the exact effect he had intended, and chance thus became the mirror of nature.
It's an interesting story, and nothing about it seems that unlikely. Except that Pliny then mentions that the painter Nealkes did the exact same thing. He also flung a sponge at a painting in anger, and in this way managed to get the foam coming from a horse's mouth to look just right.

We find another variant of the story in the 63rd Discourse ("On Fortune") of the Greek orator Dio Chrysostom. Now the painter is Apelles, who, like Nealkes, was struggling with the foam coming from a horse's mouth:


What happened to Apelles the painter because of Fortune deserves recounting. For, as the story goes, he was painting a horse — not a work-horse but a war-horse. Its neck was high arched, its ears erect, its eyes fierce, like one come not from work but from war, with the spirit of the charge in their glance, and its feet were rising in the air, touching the ground lightly one after the other. Moreover, the driver had a firm grip on the reins, throttling the martial gallop of the horse in mid-career. But though the picture had everything true to life, there was lacking a colour wherewith to depict froth such as there would be when blood and saliva have mixed in constant intermingling, the panting breath driving before it the moisture of the lips and forming froth because of laboured breathing, while the cruel bit spattered blood upon the froth. So, then, Apelles knew not how to represent froth of a horse wearied in action. But as he was more and more perplexed, finally in a fit of desperation he hurled his sponge at the painting, striking it near the bit. But the sponge, containing as it did many colours, which when taken together resembled bloody froth, fitted its colour to the painting. And at the sight Apelles was delighted by what Fortune had accomplished in his moment of despair and finished his painting, not through his art, but through the aid of Fortune.
With a total of three sponge-throwing ancient painters, we're in urban legend territory. (Or, at least, the ancient equivalent of an urban legend.) It just seems unlikely that so many painters got lucky by throwing sponges. But for some reason, it was a story that appealed to ancient writers. The art historian Horst Janson suggests that, "The inference to be drawn from the sponge story, it would seem, is that Fortune reserves such 'strokes of luck' only for the greatest of artists, as if on occasion she took pity on their ambition to achieve the impossible."

We can find the sponge story repeated by later authors. Michel de Montaigne told the story in his essays, and Thomas Carlyle alluded to it in the final chapter of Sartor Resartus.

But I'm curious whether the modern art world has generated its own similar stories about the role of chance in artistic creation — specifically stories about artists flinging things at their canvases in anger, and in this way serendipitously perfecting their work.

After some searching, I came across the Indian artist Tyeb Mehta, who was fond of telling the story that in 1969 he was suffering from a creative block. Finally, in frustration, he flung black paint at a canvas, creating a black, diagonal streak. But as he looked at what he had done, he realized that the black streak seemed to "cleave the canvas and yet unite it at the same time," and he went on to create an entire "diagonal" series, consisting of paintings divided by black streaks. 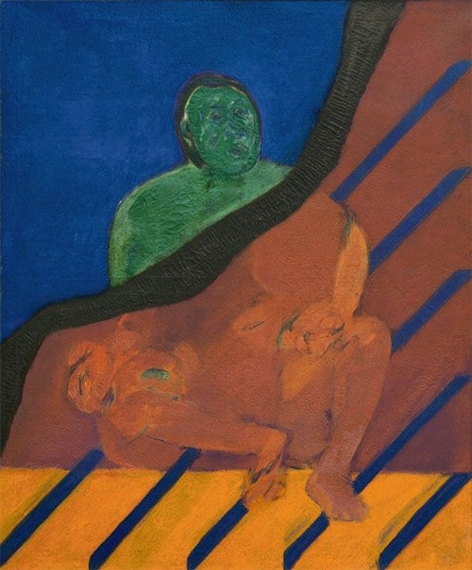 Of course, Jackson Pollock flung paint at his canvases, but to me that doesn't seem to be the same because Pollock was flinging paint deliberately, rather than in a moment of impulsive anger.

Can anyone think of other modern equivalents of the sponge-flinging story? Let me know!

Someone trying to clean a mess up with a sponge and accidentally discovering they liked the effect sounds way more plausible to me.
Posted by zequi  on  Tue May 19, 2015  at  12:06 PM
Commenting is not available in this channel entry.