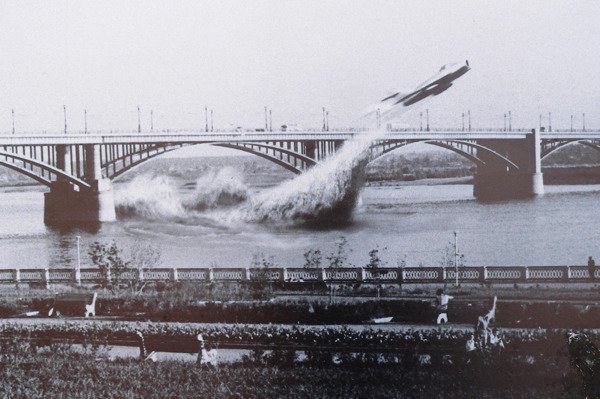 This image shows Soviet pilot Valentin Privalov flying a MiG-17 under the central span of the Communal Bridge over the River Ob in Novosibirsk on June 4, 1965.

The story goes (as much as I can piece it together) that Privalov did this on his own initiative, as a stunt. The shore of the river was filled with vacationers, among whom were officers from the district headquarters, when suddenly the MiG came roaring out of the sky. Afterwards the crowd spontaneously started to applaud, but Privalov's superiors weren't happy, and they suspended him. He was threatened with disciplinary action, but Secretary of Defense Marshal Malinovsky (perhaps swayed by positive public reaction to the stunt) allowed him to return to service.

The photo found its way onto the internet fairly recently. It first appeared on various Russian-language forums, and then on sites such as Reddit. Unfortunately, I can't find any site that provides an original source for the image. I'm guessing that it must have run in a Russian newspaper or magazine, sometime circa 1965.

The photo is obviously fake. The plane wouldn't have created such a huge plume of water. And how likely is it that someone would have managed to capture a picture of the scene at exactly the right moment? And if you look closely, you can see several people in the lower-right corner who have their backs turned to the bridge. In real life, the noise of the jet would have caused everyone to look in that direction.

But I'm guessing this image was never presented to the public as a real photo. It was a photographer's recreation of the event, and nothing more.

The better question is, did this stunt really happen? As far as I can tell, it did. The story is referenced on the Russian-language wikipedia page about the Communal Bridge in Novosibirsk. (It says that the event happened on June 3, not June 4, so there seems to be some disagreement about the dates.)

Also, I found a reference to the stunt in an American news-wire article dated Aug 29, 1965, which discusses a recent spate of hooliganism in Novosibirsk, including "a drunk who stole a streetcar," "an aircraft mechanic who went on a joyride up and down runways in an Ilyushin 4 transport," and "a stunt flier who flew under bridges."

Albuquerque Journal - Aug 29, 1965
I haven't been able to find any definitive info about Privalov's subsequent career. But I did come across a reference to a Valentin Privalov in the Feb 21, 1993 issue of Stars and Stripes. He was described as being "deputy head of Russia's civil aviation air traffic control center in Moscow." So it could well have been the same guy.

If this photo is faked, it was amazingly done. Everything from the understanding of hydrodynamics, to the blur of the jet from the shutter speed. If it could be known the exact type of camera and shutter speed, The exact speed of the aircraft could be determined- and along with the plausibility.

Because blowing this up and examining pixel by pixel- leads me to believe its 100% real.
Posted by Jenkins  on  Tue Feb 25, 2014  at  01:30 PM
It looks fake to me. The angle of the plane exiting the bridge doesn't look natural.
Posted by nikko  on  Tue Jan 10, 2017  at  10:31 PM
The picture isn't real and hasn't been presented as such. In a local museum it is clearly defined as a "collage", so created purely for illustration purposes. But this connotation might have been lost in multiple reposts.

The pilot career was ok. Initially the pilot was expelled from the communist party (which meant huge problems for his career) and expected military court, but suddenly no penalty followed. He was promoted to mayor and later to lieutenant colonel, and continued his service training new generation of pilots and probing new airplanes and weapons. He quit service at the age of 42 and continued working at the civil aviation as a flight control officer.

If you can read russian, here is a bit more:
https://defendingrussia.ru/a/valentin_privalov_mne_ochen_tjazhelo_bez_neba_ja_vse_vremja_letaju_vo_sne-071/
Posted by Sergey  on  Tue Aug 01, 2017  at  03:53 AM
Commenting is not available in this channel entry.