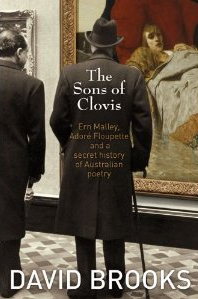 There's a new hoax-related book out that sounds interesting: The Sons of Clovis: Ern Malley, Adore Floupette and a Secret History of Australian Poetry by David Brooks. From the Sydney Morning Herald review:

At the heart of the book is the famous Australian hoax, the Ern Malley affair, in which two young, still-forming poets, McAuley and Stewart, fabricated the raw, working-class identity Ern Malley, only to have him die tragically young, leaving behind his book of experimental poems, The Darkening Ecliptic (1944).
Equally - and this is where the detective work really kicks in - the book is also about a late- 19th-century literary hoax that produced the wonderfully foppish Adore Floupette, ''poet of the decadent school … with nothing but scorn for the public''. Floupette, whose voice ''could be heard from one end of the cafe to the other'', reciting the ''ternaries that he had composed over dinner: 'I would love to be gaga/With my heart adrift/On the syringa flower.'
'''Gaga!' came from one of the ladies who until then had kept the profoundest silence. 'But my poor dear, you are already.'''
It's Brooks's achievement to compel us into considering the (improbable, possible) links between these two hoaxes.
I'm not sure if it's being published anywhere but Australia, though this won't be an issue if you're willing to pay international shipping.

That would be really cool! (Oh, and I mailed the cardiff giant a few days ago. So keep an eye out for that!)
Posted by The Curator  in  San Diego  on  Tue Oct 25, 2011  at  01:37 PM
According to their website, it's in stock at my local book store. I'll pick it up this week and hopefully get to the post office this Saturday 😊
Posted by Nettie  in  Perth, Western Australia  on  Wed Oct 26, 2011  at  06:29 AM
Commenting is not available in this channel entry.