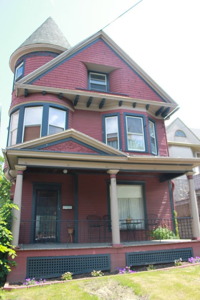 A house for sale in Dunmore, PA is getting lots of buzz (and multiple offers) because its owner has described it as "slightly haunted" in the real estate listing.


Built in 1901, this Victorian home in the Hollywood section of Dunmore features 1850 sf of living space with an additional 1350 sf of partially finished space. Original hardwood floors throughout entire home. 4 bedrooms, 2.5 bathrooms. Off-street parking. Freshly painted. New moulding throughout entire first floor. Slightly haunted. Nothing serious, though. e.g. The sounds of phantom footsteps. A strange knocking sound followed by a very quiet (hardly noticeable, even) scream at 3:13am, maybe once a week. Twice a week, tops. And the occasional ghastly visage lurking behind you in the bathroom mirror. Even still, this occurs very rarely and only in the second floor bathroom.
According to Forbes, the owner of the house, Gregory Leeson, "readily admits that he doesn’t believe in ghosts or hauntings." He described the house as haunted "to be funny." Although he says he genuinely has heard "voices, footsteps or doors slamming from time to time."