Oops! We forgot the elevators 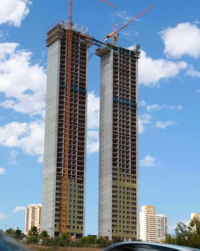 From Europe comes a good example of the absent-minded engineer urban legend. The most common variant of this legend, which seems to be repeated on almost every university campus, is that the library is sinking, because the engineers forgot to include the weight of the books when designing the building.

The version that recently reared its head in the European press is that the Edificio Intempo skyscrapers currently under construction in Spain, which will be Europe's tallest residential towers when completed, won't have elevators on the top 27 storeys because the engineers forgot to design them in. The story, as repeated in newspapers such as El Pais, is that the buildings were originally going to be 20 storeys high, but developers later decided to make them 47 storeys, but "neglected to allow the extra room required by a lift ascending over twice as far." So whoever lived on the 47th floor would have to climb a lot of stairs!

Rafael Ballesta, sales manager for the towers, has described the allegation as "ridiculous": "We are constructing the highest residential skyscraper in Europe so how is it possible to build without elevators?" And reporters who have now visited the construction site have confirmed that there are indeed elevators going all the way up. [dezeen.com]