This Day in the History of Hoaxes: September 4 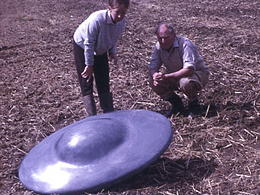 September 4, 1967: The Great British UFO Invasion
The discovery of six saucer-shaped objects giving off "bleep-bleep" signals caused panic in southern England. There was real fear of a UFO invasion, although the Ministry of Defense also suspected the mysterious saucers might be some kind of Soviet weapon. But at the end of the day, two trainee aircraft engineers confessed the saucers were their creation. They explained, "We believe that flying saucers could land one day, so we landed our own to give the authorities some practice." [Daily Mail]