This Day in the History of Hoaxes: September 28 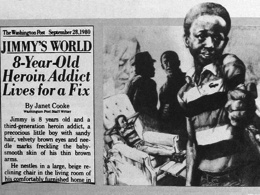 September 28, 1980: Jimmy's World
On this day in 1980, the Washington Post ran a story on its front page by reporter Janet Cooke about "Jimmy," an 8-year-old heroin addict. The story eventually won her a Pulitzer Prize. But as pressure on Cooke mounted to reveal where Jimmy lived, so that he could be helped, she finally admitted that she had never met Jimmy and that much of her story was fictitious. Cooke resigned, and the Post, humiliated by the incident, returned the Pulitzer Prize. More…