This Day in the History of Hoaxes: September 23 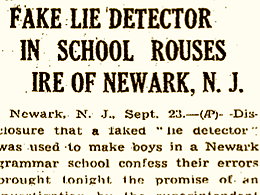 September 23, 1936: Fake Lie Detector
The disclosure that a grammar school in Newark, New Jersey had been using a fake lie detector to make boys "confess their errors" caused a storm of controversy. The operator of the machine (usually the school principal) would activate a hidden switch whenever he thought a boy was lying, causing a red bulb to start flashing. In response to criticism that the fake lie detector created a "jail atmosphere," the principal ordered the machine burned in the furnace.