This Day in the History of Hoaxes: September 19 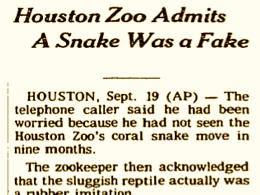 September 19, 1984: Houston Zoo's Fake Snake
On this day, the Houston Zoo admitted that the coral snake on display for the past two years was not actually alive. It was a rubber snake. Zoo curator John Donaho explained, "We have had live snakes in the exhibit, but they don't do well. They tend to die. Rather than kill snakes, we put out a rubber one for people to be able to see what they look like." The zoo's confession came after a concerned caller reported he hadn't seen the snake move in months. The zoo subsequently received a box from an East Coast zoo containing another rubber coral snake as well as "breeding loan" documentation.

For decades coral snakes had a captive mortality rate of 100%. They simply do not feed in captivity. Force feeding them is very tricky since they have small heads, and are difficult to hold, and the venom is really super toxic. When the pharmaceutical industry decided that coral snake venom might have components worth exploring a means had to be devised to keep them alive to extract venom from them. A keeper devised a "sausage stuffer" that you thread into the snake's gullet through its mouth, and then inject chicken baby food into the stomach of the animal. You can see this in action if you like on You Tube, Search: "Eastern Coral Snakes, Care & Venom Extraction ". The video posted by "Viperkeeper" shows the feeding process starting around 16:00.
There are several variations on this theme, but the priciples are the same.
Posted by J M Beard  on  Fri Sep 19, 2014  at  02:10 PM
Commenting is not available in this channel entry.