This Day in the History of Hoaxes: September 18 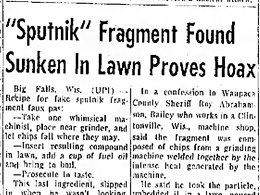 September 18, 1962: Fake Sputnik Fragment
In Sept. 1962, the Soviet Union's Sputnik IV satellite fell out of orbit, descending to earth over Wisconsin. A fragment was found in the lawn of a Big Falls, Wisconsin couple. But when NASA examined the fragment, the agency concluded it was a fake. At which point, 22-year old machinist Lyle Bailey admitted he had created it out of red-hot metal chips from a grinder. He had planted the fake fragment in the ground, then had doused it with fuel and lit it on fire, to give it a charred look. He explained it was simply a prank that had gotten out of hand. A real fragment from the satellite was found in Manitowoc, Wisconsin.