Samuel "Old Uncle Sam" Shepherd had a hard but interesting life. He was a slave who managed to buy his freedom, and lived on until 1909. But it's his birthdate that generates more interest than the date of his death.

His grave marker in Oak Hill Cemetery (Lawrence, Kansas) lists his birthdate as 1784. This would make him 125 years old when he died. If true, he would potentially be the oldest person ever to have lived. 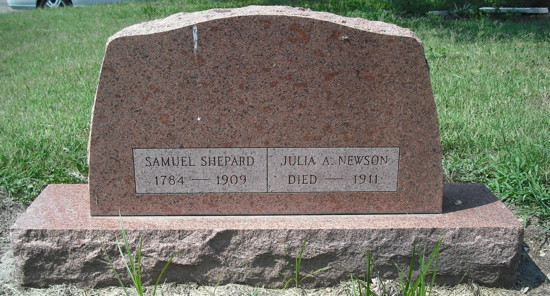 However, the documentation for Shepherd's birthdate is incredibly ambiguous. There's just his word for it, and he seems to have guessed at the date. This disqualifies him for consideration as the Oldest Person Ever.

In fact, Shepherd seems to offer an example of the phenomenon of age exaggeration, which I've discussed on the site before. It's the tendency for people to lie about their age (or, more charitably, to grow confused about it), exaggerating it upwards as they near the centenary mark. They do this because being perceived to be very old makes them feel special and gives them higher status in the community.

The most famous example of this phenomenon is the Ecuadorian town of Vilcabamba, which briefly gained a worldwide reputation as the Town of Supercentenarians, until anthropologists realized that large numbers of people in the town were misrepresenting their age.

I've also posted about the case of Buster Martin (who claimed to be a 101-year-old marathon runner), Mariam Amash (who claimed to be 120), and the Chinese village of Bama (which, like Vilcabamba, is supposed to be full of supercentenarians).

There was Methuselah too: http://en.wikipedia.org/wiki/Methuselah who was supposed to have lived to 969. I'm thinking he was probably closer to 69 when he died?
Posted by hulitoons  in  Abingdon, Maryland  on  Mon Jul 09, 2012  at  10:59 AM
I thought there was an Italian woman who lived to the ripe old age of 124? Can you confirm that?
Posted by Crystal Kaulbars  on  Tue Jul 10, 2012  at  05:32 AM
Is there any estimates of how old Samuel Shepherd was a certain year? If so it would be possible to calculate his approximate birth year.
Posted by Lena Synnerholm  on  Wed May 15, 2013  at  11:18 AM
Commenting is not available in this channel entry.