The Hundred-Million-Dollar Robbery of the U.S. Treasury 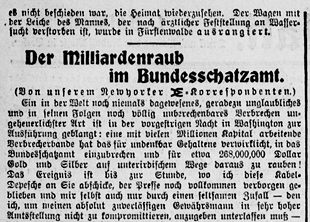 On April 1, 1905 the Berliner Tageblatt broke the news of a shocking and massive crime. All the gold and silver in the U.S. Federal Treasury had been stolen. A group of thieves funded by American millionaires had tunneled beneath the Treasury and robbed it from below, getting away with over $268,000,000. The U.S. Government was said to be desperately trying to conceal the crime, even as its forces chased the criminals across the oceans of the world.

The Berliner Tageblatt detailed the amazing process by which the theft had been achieved. All told, it had taken three years and had only been made possible because it had been bankrolled by a group of American 'Robber Baron' multimillionaires.

First, the criminals bought a building that stood on the opposite side of the Potomac River from the Treasury building in Washington D.C. This building, which they disguised as a factory, served as cover for the tunneling operation.

Then they tunneled directly beneath the river, coming up beneath the Treasury on the opposite shore. All the gold and silver was quickly removed and transported through the tunnel by means of electric cars and loaded into small submarines that took it down the river to ships waiting in the open sea. Once the treasure was loaded into the ships, the thieves departed at full speed and hadn't been seen since. 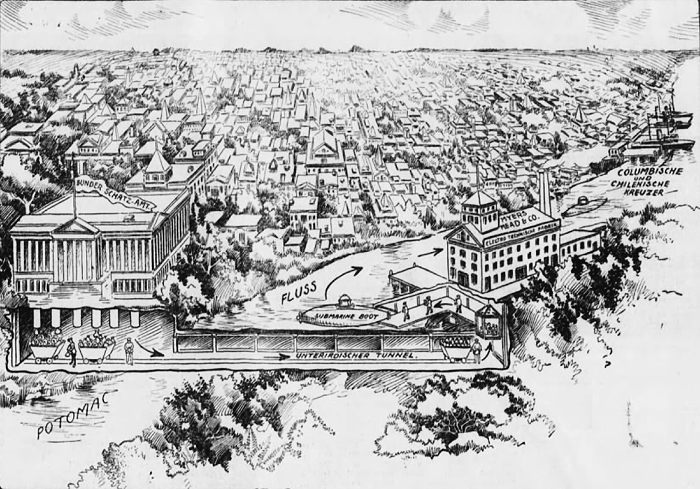 The entire report was, of course, an April Fool's Day hoax. And yet it succeeded in completely fooling much of the German media, which lost no time in reprinting the news of this remarkable crime. From Germany, the news spread to Austria, Hungary, and other neighboring countries. One magazine even created an illustration that showed the exact location of the tunnel beneath the Potomac. (I'm not sure what magazine it was, but the illustration was widely reprinted by other newspapers throughout the world.)

The story was soon revealed to be a hoax, and the Berliner Tageblatt gloated at the success of its joke. But the revelation of the hoax then made front page news throughout the world, especially in America where reporters were amazed that their German counterparts had so easily fallen for what seemed like an absurd claim. The Americans noted that the hoax had doubtless succeeded so well because it played upon the somewhat fanciful image of America held in the minds of many Europeans — namely that America was a kind of Wild West ruled by outlaw millionaires where it was plausible that such a brazen robbery might take place. 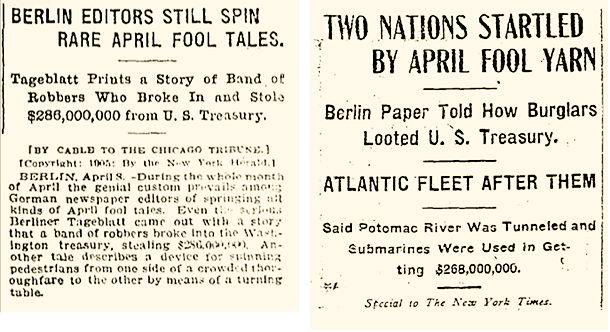 The hoax had been written by Louis Viereck, New York correspondent for the Berliner Tageblatt, using the pen name "L. Triang". (Among his other accomplishments, Viereck was rumored to be the illegitimate son of Kaiser Wilhelm I.) However, American papers noted that the premise of the hoax bore a strong resemblance to the plot of a recent book by Alfred Henry Lewis titled The President: A Novel, which involved a scheme to rob the treasury by tunneling into it from an old sewer. Here's a description of the plot of Lewis's novel from the Brooklyn Daily Eagle (Apr 30, 1905):


a society figure in Washington carries out the plot to loot the treasury. He learns that an old sewer runs close to the vaults. He buys a fast yacht, employs crooks from New York to do the work, and ingeniously devises rubber bags to be blown up as wanted by the man who has broken into the vaults from the sewer. Each bag will carry twenty pounds of gold and will float down the slow stream of the sewer to its mouth at the Potomac. There, in dead of night, row boats will take the gold to the yacht. The plot is foiled only after the vaults are broken into.
Text of the Article

The Hundred-Million-Dollar Robbery of the Federal Treasury
A most abominable crime that has no parallel in the annals of the world, one, almost incredible, and with consequences which cannot yet be estimated, was perpetrated the night before last in Washington. A gang of criminals, working with many millions of capital, has successfully carried through what was always considered impossible, namely, to rob the United States Treasury and to take from it $268,000,000 in gold and silver by way of a subterranean tunnel.

Up to the present time the fact has been kept secret from the press, and I myself became acquainted with it by an absolutely authoritative person during my presence in the national capital. The whole thing is to be kept secret as long as possible, at least until the Government has succeeded in finding traces of the criminals who have fled across the ocean on their own ships as far as it may be at all possible to find such traces. If this can be accomplished, there may be some chance of getting the treasure back entirely or in part.

The millions of the United States Treasury were protected through a very complicated invention called the Holmes Electric Protector in such a manner that burglary was considered impossible, for, through this protector, alarm signals are fixed on each of the thirteen main treasury vaults, consisting of a system of electrically worked indicators. The very mment such an alarm signal sounds no fewer than 1500 special guards of the Secret Service policemen and soldiers of the garrison, who happen to be on duty, are called simultaneously to the Treasury.

The fact that this apparatus, having been in use sixteen years, did not work, although in this month several examinations were made, leaves no doubt that the criminals had accomplices among the highest officials of the treasury, for only thus can it be explained that the electric current lost itself in the ground instead of giving the alarm.

It must be considered less remarkable that the sixty-eight night watchmen did not hear anything, or did not want to hear anything, because these fine officials know only one care, to draw their salaries on the first of the month. It may, however, be also the fact, that their attention was not called to anything remarkable, for the machines used by the criminals were perfectly noiseless. Now the Treasury vaults have been robbed of their entire contents, they are shown during the usual hours to the public without any visitor suspecting anything amiss.

The abominable deed was carried out in the following diabolically refined manner. The criminals who, as it is believed, acted on the instance of certain American millionaires and had millions and millions at their disposal, had built an electro-technical factory in the year 1902 on the left bank of the Potomac, opposite Fifteenth street, on which the Treasury is situated. This factory, which showed the firm name of Myers, Mead & Co., seemingly was nothing but a plant for electric apparatus and machines. In fact and truth, however, it was the main purpose of the whole building, which is today entirely abandoned, to hide the subterranean tunnel, which was to be dug from there to the scene of the burglary.

The Subterranean Tunnel
From the factory grounds a tunnel was dug almost an English mile long, thirty feet below the river bed and ending directly under the treasury in a large caisson. From here thirteen shafts were dug upward, each ending directly under one of the thirteen treasury vaults. Thus it was possible to cut out the foundations simultaneously in all chambers and remove their contents within a very short time into the tunnel, where the gold was transferred to electric cars and in this manner carried to the factory. From there transportation was effected by means of a fleet of at least twenty submarine boats to the large ships waiting in the open sea. The submarines were probably built in Europe for this specific purpose. Evidently they were fitted up in the same manner as the ships which are used for the purpose of lifting lost treasures from the bottom of the sea. Certainly, there were contrivances by means of which the cargoes of the electric cars were transmitted very quickly, by means of compressed air, to the submarine boats, whereupon these ships with their cargoes immediately moved off at full speed.

It has been positively ascertained that these ships went through Chesapeake Bay to the ocean, where not fewer than three and probably five large steamers were lying under steam. These vessels took on board the precious freight as well as the transport boats with all their crews.

As to the robber fleet some very interesting facts have already been ascertained. The fleet probably was composed of three Colombian and two Chilean cruisers, some vessels, in regard of which no news has been heard since last year. It was said that the cruisers were sold to Russia and a denial by the Russian Government was not believed.

In connection with this, a story that was cabled last year may be of great importance. As will be remembered, the story was also cleverly launched in the American press in regard to a mutiny by the crews of board of several Colombian ships. It was said the men intended to go on a piratical expedition. In truth, however, it is now believed that the ships were purchased by agents of the conspirators and brought to a hiding place somewhere in Polynesia or the islands of Patagonia, where the same were fitted up for the expedition to carry the treasures of gold and silver away from Washington.

The whole North Atlantic Squadron has been ordered to search for the burglars on every route which the criminals could have taken. All the cruisers in the Gulf of Mexico, as well as in the Caribbean Sea will join in the chase. In addition to this the fastest ships stationed in the Pacific ports have been sent south with orders to await further instructions in Chilean ports. The honor of the United States is at stake, and everything will be done to have the abominable crime punished as well as its perpetrators and bring back the treasures of loot to this country.