Mike McGrady was the mastermind behind the Naked Came the Stranger hoax of 1969. His aim was to show that any book with enough sex scenes, even if lacking in any other merit, could sell well. And the book he created to prove this point did sell well. Although its sales had a lot to do with the fact that McGrady's sister-in-law, the attractive Penelope Ashe, posed as its author. Which shows that the good looks of an author can definitely sell books. And, of course, the book sold even better once it was exposed as a hoax, demonstrating that there's no such thing as bad publicity. 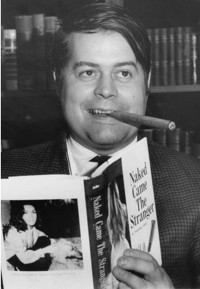 Mike McGrady
Mike McGrady, Known for a Literary Hoax, Dies at 78
nytimes.com
Mike McGrady, a prizewinning reporter for Newsday who to his chagrin was best known as the mastermind of one of the juiciest literary hoaxes in America — the best-selling collaborative novel “Naked Came the Stranger,” whose publication in 1969 made “Peyton Place” look like a church picnic — died on Sunday in Shelton, Wash. He was 78 and lived in Lilliwaup, Wash. The cause was pneumonia, said Harvey Aronson, who with Mr. McGrady was a co-editor of the novel, written by 25 Newsday journalists in an era when newsrooms were arguably more relaxed and inarguably more bibulous.