Swiss artist H.R. Giger recently died. He's most famous as the designer of the creature in the horror film "Alien". But Ben Radford notes that Giger also, indirectly, provided the inspiration for the chupacabra legend.

The reasoning goes like this: Giger designed the monster, Sil, featured in the 1995 science-fiction film "Species". Soon after Species came out, a Puerto Rican woman named Madelyne Tolentino claimed she saw a creature near her house. She described it as having large eyes, walking on two legs, having no ears or nose, and a row of spikes on its spines. Tolentino's description strongly resembled the creature in Species. So much so that it was probably inspired by it. And Tolentino's account was the most influential early description of a chupacabra.


The Sil creature and the chupacabra creature that Tolentino described are remarkably similar...

As I discuss in my book "Tracking the Chupacabra: The Vampire Beast in Fact, Fiction and Folklore,"

both Sil and the chupacabra also have the same origin stories. The two best-known explanations for the chupacabra are that it is either an alien life form or the result of secret U.S. government genetics experiments gone wrong — a sort of Frankenstein scenario.

These are also the origin explanations for the creature in "Species." Sil is both an extraterrestrial alien and the result of secret U.S. government genetics experiments gone wrong. The similarities between Sil and the chupacabra — both physically and in the stories told about them — are unmistakable.

Thus the original and most influential chupacabra eyewitness in history described a monster she'd seen in a movie as a mysterious beast she encountered in real life. Over time the chupacabra has changed form, and most modern reports are not of the original chupacabra that Giger designed (and Tolentino described) but instead resemble mangy dogs, coyotes and even raccoons.

It's unlikely that Tolentino intentionally created a hoax that spawned a famous monster. Instead she simply confused a real-life memory with something she experienced in a film. This is a common — and harmless — phenomenon known in psychology as confabulation.

So Giger designed Sil. Tolentino borrowed details from Sil when she described the creature outside her house. And Tolentino's account spawned the chupacabra legend. In that way, Giger became the father of the chupacabra. 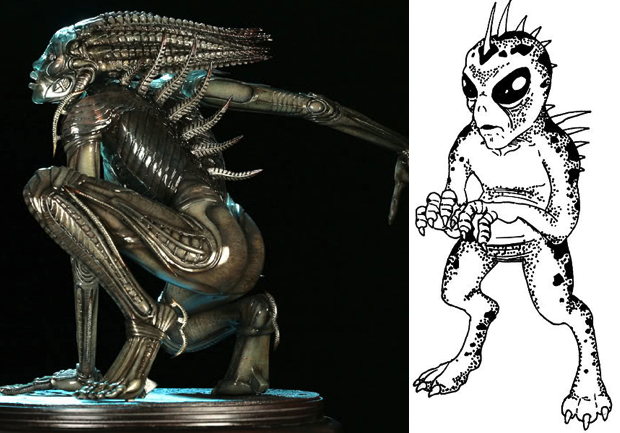 Giger's Sil from Species, vs. an image of the Chupacabra based on Tolentino's description

Not sure how convinced I am by this theory. Tolentino sees an entity one night and instead of noting its particular features her head conjures up a creature from a movie she saw? And she never thinks to herself, "Wow! That weird entity looks just like that thing I saw in that movie," The human mind's mechanisms are subtle, and such things no doubt happen, but I don't think we can assume such a thing has happened in a specific case.