The Rhythm of the Trees

The Manchester City Art Gallery received over 1000 entries for its 1993 Academy of Fine Arts Exhibition. Of these, a six-member panel of judges chose 150 works for inclusion in the show.

One of the paintings selected was "Rhythm of the Trees," which the judges praised for its "color balance, composition, and technical skill."

But after gaining a place, the painting's creator was revealed to be Carly Johnson, a 4-year-old girl from Chorley, Lancashire. The judges had been unaware of her age. 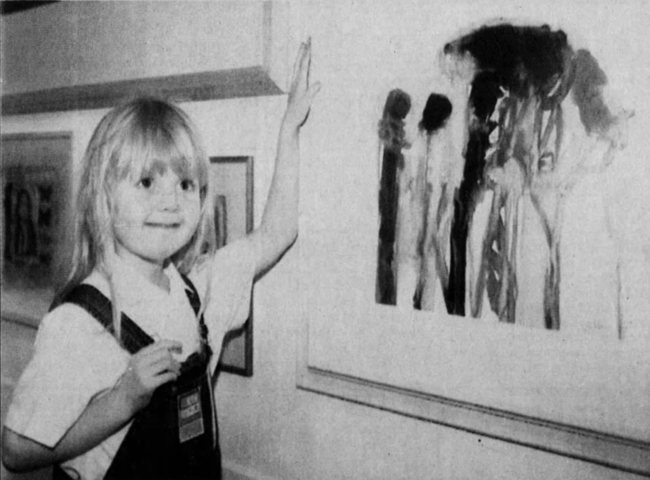 Carly poses with her painting

Carly had painted the picture while playing in the studio of her grandfather, David Sandrill. He had pinned the picture on the wall and had titled it.

When Sandrill submitted some of his own work for the Manchester exhibition, Carly's mother, Helen, slipped Carly's painting in as well "just for the heck of it."

Carly's mother described the painting as "shapeless blobs" (Carly herself modestly said it was "just a little pattern") and told the BBC, "We could not believe it when we heard the judges had decided to show it… It proves anybody can do modern art."

The revelation of Carly's age made headlines throughout the world. The British press, in particular, mocked the Gallery for displaying toddler art. The Daily Mail presented its readers with three abstract works by leading adult artists and three works by children from Strawberry Fields nursery school in West London, and challenged its readers to tell the difference between the "modernist school" and the "playschool."

However, the Manchester Academy was unrepentant and insisted it had no plans to remove the painting from the exhibition. Its president, Glenys Latham, noted that, "often technical skill can get in the way of instinctive response. Remember that the art of children often has an innocence, an unplotted quality, which adults often strive to gain. So I don't feel in the least embarrassed."

And on the very first day of the exhibition, the gallery received six offers to buy Carly's painting. The work sold for £295 to the first caller, Barnaby Blacker, owner of an art gallery in County Cork, Ireland.

Carly completed one follow-up painting, of a pirate with an eye-patch, in anticipation of an interview on GMTV. It took her ten minutes to complete. Viewers were given a chance to bid for it.

It's really true - anyone can do "Modern Art".
Posted by Frank TALKER  on  Wed May 27, 2015  at  01:28 AM
WOW children's art is a blessing. They are innocent children that teachers and parents give them the opportunity to create their own creations. This is the best part.
Posted by Grendelia N Balandran  on  Wed May 27, 2015  at  11:16 PM
Commenting is not available in this channel entry.