The Perennial Return of Future Day

In the 1989 movie Back to the Future Part II, Marty McFly and Doc Brown use the time-traveling Delorean to travel from 1985 to October 21, 2015. In the movie, this date is briefly seen displayed on the car's onboard time monitor. So Oct 21, 2015 is officially "Future Day," when Marty McFly will arrive in what will then be the present. 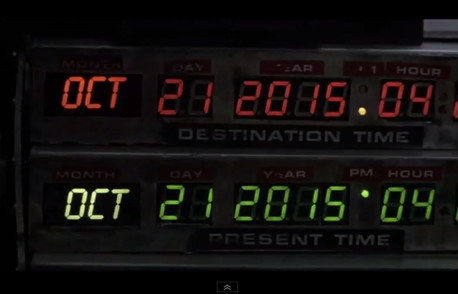 But people don't want to wait that long, so hoaxers keep setting "Future Day" to a date closer at hand. The first time this happened was in 2010, when Total Film magazine mistakenly declared July 5, 2010 to be Future Day — and then created a fake image to back up their claim. They meant it as a joke, but a lot of people took it seriously. (telegraph.co.uk) 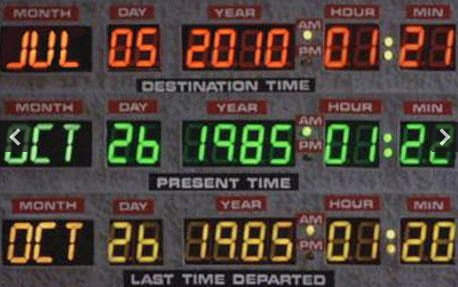 More recently, Simply Tap (makers of a mobile checkout app) declared on Facebook that June 27, 2012 was Future Day (they were promoting a box set of Back to the Future DVDs), and they also created an image to back up this claim, which once again began to circulate online. (slate.com) 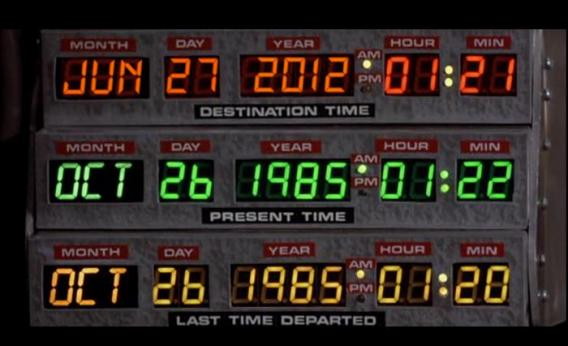 So the real Future Day is still three years, but that seems like plenty of time to fit in a few more fake Future Days before it finally arrives.

The Present Time and Last Time Departed are merely two minutes apart. That puts it just after the dog is sent through. THe Destination time should therefore be sometime in 1955.
Posted by Sharruma  in  capable of finishing a coherent  on  Sat Jun 30, 2012  at  08:23 AM
Commenting is not available in this channel entry.