Recently I was lucky enough to go on a cruise of Alaska's Inside Passage, visiting towns such as Juneau, Skagway, Ketchikan, and Sitka. I'd never been on a cruise before, and it was a great experience. But, being a hoax-history enthusiast, Sitka was the location that, before the trip, I was most looking forward to seeing. After all, it was the site of one of the greatest April Fool's Day pranks of all time, the (fake) eruption of Mt. Edgecumbe.

Back in 1974, a local prankster, Porky Bickar, had air-dropped tires into the crater of Mt. Edgecumbe, lit them on fire, and made it seem as if the dormant volcano was rumbling back to life. So at last, I anticipated, I would get to see Mt. Edgecumbe and be able to imagine what it must have looked like to Sitka residents on that April 1st as they saw smoke rising from its top. 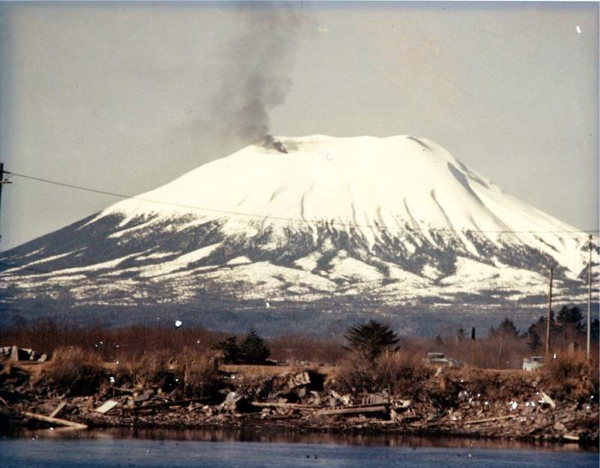 Unfortunately, the Alaska weather didn't cooperate. When we arrived in Sitka, it was a damp, drizzly day. Mt. Edgecumbe wasn't visible at all. This had been a problem for Porky as well. After dreaming up his prank, he had been forced to wait three years until an April 1st arrived when the weather was clear.

Still, there's plenty of other things to see in Sitka. So, during the morning, my wife and I did a variety of touristy activities. We went to a raptor center, checked out the totem poles in the historical park, and visited the Russian Orthodox cathedral. Soon the afternoon had arrived, and we had just a few hours left in town before the ship departed. It was still a grey day, with no sign of the volcano. And I felt a sense of frustration, thinking that there had to be something to see in town related to the prank. It was probably the only time in my life I would be there. What a waste if I couldn't take advantage of the opportunity!

But what to see? The prank had occurred over 45 years ago. Porky himself had died in 2003. Plus, pranks don't tend to leave behind much in the way of material history. They're not the kinds of things that museums or cultural centers typically commemorate.

I was about to give up and spend the rest of the time browsing through the gift shops with the other cruise-ship passengers, but then I spotted the Sitka Visitor's Center and decided I might as well stop in and ask them for help.

The young woman working there turned out to be incredibly helpful. She knew all about the prank, but initially I stumped her when I asked if there was anything related to it that it was possible to see. She conceded that there was no memorial or museum display about the prank. But then she had an idea! She recalled that Porky was buried in Sitka National Cemetery, located at the edge of town. Why not visit his grave, she suggested. Since the town of Sitka is quite small, it was only a short walk.

I thought that was an excellent suggestion. For some reason, it had never occurred to me to think about visiting Porky's grave, or that it might be so close to the town center.

After thanking her, my wife and I set off to find Porky, and less than fifteen minutes later we had succeeded. It was, indeed, only a very short walk to the cemetery, and once there a grave locator allowed us to find Porky's grave almost immediately. (You have to search for his full name, Oliver J. Bickar. Although his nickname, Porky, is included on the marker.) He's buried right next to the main building.

We spent a few minutes paying our respects at his grave. I posed for a picture beside his tombstone. The entire experience felt like a nice way to be able to connect, on a more personal level, with a prank that, over the years, I've spent so much time researching and reading about. Then we headed back into town.

So that was my visit to Sitka. I didn't get to see Mt. Edgecumbe, but at least I got to visit Porky. 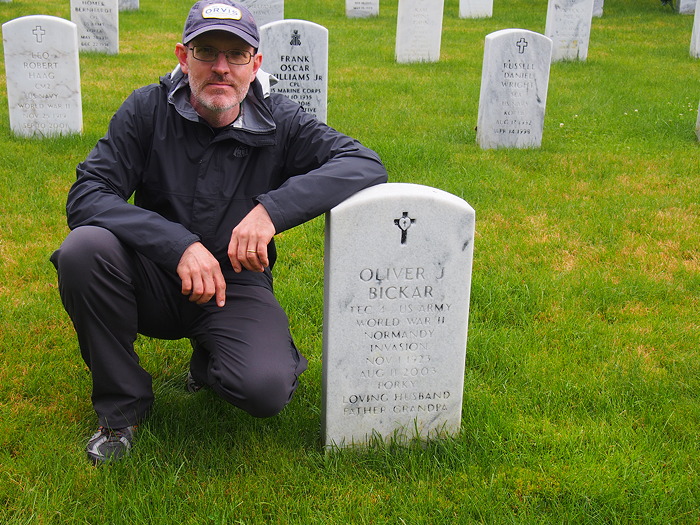 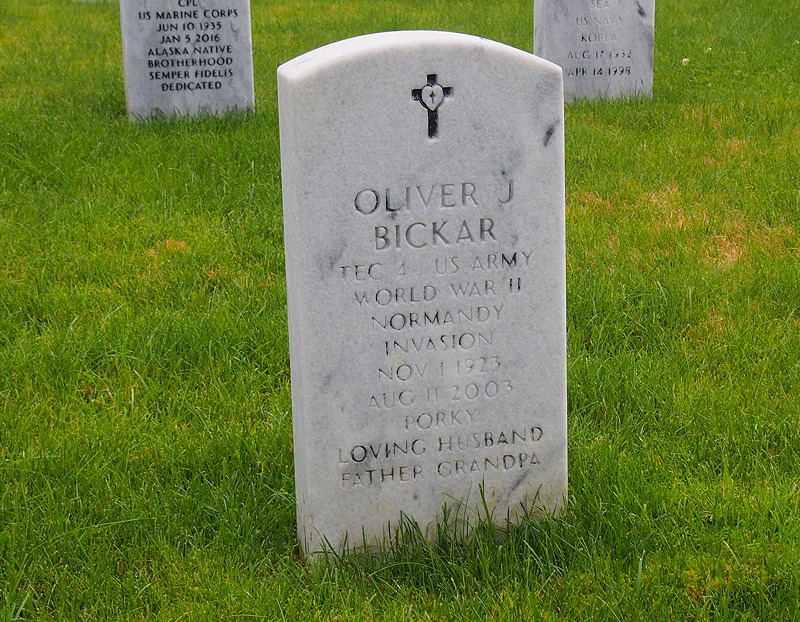 Wow, after this long a gap you post a new article and get instant transsexual porn spam.
Posted by Carl  on  Mon Aug 12, 2019  at  05:55 PM
I hope to see more from you soon, it's a great blog!
Posted by pumpkin sparshott  on  Tue Aug 13, 2019  at  09:01 AM
It's been years that you haven't posted hope we see more hoaxes especially the internet one's
Posted by Frederick zabala  on  Tue Aug 13, 2019  at  09:21 AM
a new article !!!! WOW!!!
Posted by ALEXANDER FILYAEV  on  Sat Sep 28, 2019  at  07:28 AM
Although Porky had remembered to notify both the FAA and the Sitka Police (he was a member of the police commission), he somehow forgot to notify the Coast Guard. While Mt. Edgecumbe was busy spewing out its black smoke, the Coast Guard Commander called for a chopper to investigate and sent a whale boat over to check things out. The chopper pilot radioed back to the commander that all he saw was a bunch of smoldering tires and a big April Fool sign in the snow. This was after the commander had called the Admiral in Juneau about the apparent crisis.
Posted by Men  on  Fri Oct 04, 2019  at  06:06 AM
Commenting is not available in this channel entry.