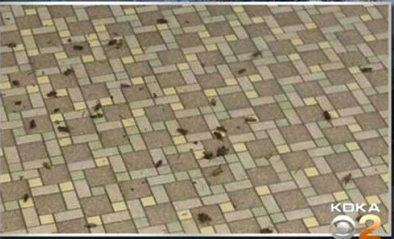 Several students at Chartiers Valley High School in Pennsylvania are facing disciplinary action following a senior prank that involved the release of "several thousand" crickets in the school.

But these recent examples of the prank don't have quite the same wit that was exhibited in a 1911 instance of it reported at the time by the Washington Post: 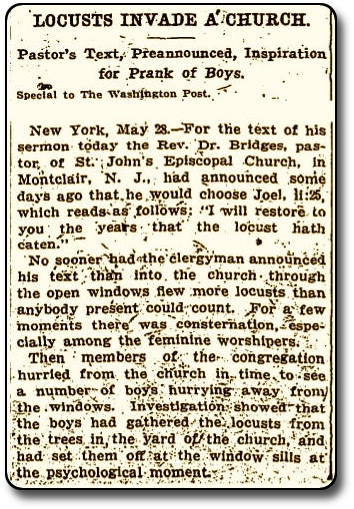 Locusts Invade a Church
New York, May 28 — For the text of his sermon today the Rev. Dr. Bridges, pastor of St. John's Episcopal Church, in Montclair, N.J., had announced some days ago that he would choose Joel ii:25, which reads as follows: "I will restore to you the years that the locust hath eaten."

No sooner had the clergyman announced his text than into the church through the open windows flew more locusts than anybody present could count. For a few moments there was consternation, especially among the feminine worshipers.

Then members of the congregation hurried from the church in time to see a number of boys hurrying away from the windows. Investigation showed that the boys had gathered the locusts from the trees in the yard of the church, and had set them off at the window sills at the psychological moment.