For over a year, a picture of the Oct 2010 cover of Tails magazine has been circulating online. The image suggests that Rachael Rays practices cannibalism and eats dogs. 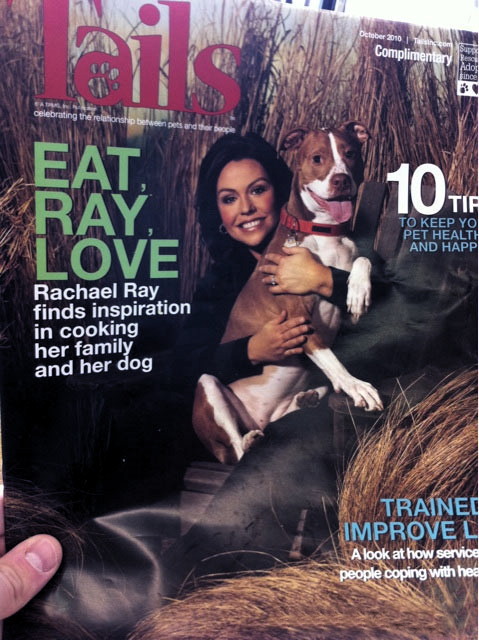 Of course, the cover is fake. The original cover included appropriately placed commas —"Rachael Ray finds inspiration in cooking, her family, and her dog." 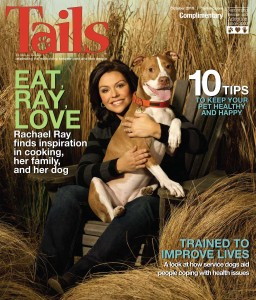 I'm not entirely sure where the fake version of the cover first appeared. According to wlwt.com, Funny or Die was the original source. Though I can't find it there. But it was posted on Food Network Humor back in March 2011, and I suspect that may be the source from which it first went viral.

Tails magazine, fearing that many people were being led to believe that their editors were incompetent at grammar, recently posted an official statement to set the record straight:


Hi TAILS Fans–
They say there is no such thing as bad publicity, and we do love a TAILS cover gone viral!
However, the circulating cover from October 2010, featuring our friend and all-time animal lover, Rachael Ray, was indeed Photoshopped.
We want to assure anyone who has stumbled upon the cover, that the image being circulated is in fact an unauthorized ALTERED cover.
The image posted here is the actual cover that was printed, WITH commas!
We do get the joke, but just want to make sure we set the record straight, for our sake and Rachael Ray’s (and her family and her dog, of course).
Thanks!
The TAILS Team

They should have written (and her, hitherto uncooked, family...). No sense of humor, apparently.
Posted by pazuzu  on  Fri Jun 29, 2012  at  12:43 PM
You are assuming that the image on the magazine's Web site was not fixed after the error was reported. Since they've got the original (electronic) artwork, they could created a flawless fixed version and claim it was never wrong.

Why didn't they show a photo of the hard copy magazine? That could be changed, too, but at least it would be more believable. As things stand I see no reason to choose one story over the other.
Posted by George P  on  Sat Jun 30, 2012  at  05:50 PM
And when her family and dog were exhausted, she would have started losing her 'inspiration'? :lol:

Jokes apart, that happens cause the magazine editor gives priority to cooking before her beloved family and dog. If they would have written "..inspiration in her family, her dog and cooking" nothing would have happened.
Posted by daniel harries  on  Tue Jul 03, 2012  at  06:02 AM
Commenting is not available in this channel entry.