When attendees at the ACM Conference on Human Factors in Computing (held in Toronto) went to the bathroom, they found a sign alerting them that "Behaviour at these toilets is being recorded for analysis. Access your live data at quantifiedtoilets.com."

Visiting the Quantified Toilets website (which has the tagline 'Capturing toilet behavior for real-time data and health analysis'), they found a live feed that provided data about all the toilet "deposits" that had been made. The information included how much had been depoisted, whether drugs were detected in it, as well as other bio-information such as pregnancy, infections, blood alcohol, gender of the depositor, and even what the odor was (neutral, sulphuric, acidic, etc.).

The website further explained that, "we analyze the biological waste process of buildings to make better spaces and happier people. We use this data to streamline cleaning crew schedules, inform municipalities of the usage of resources, and help buildings and cities plan for healthier and happier citizens." 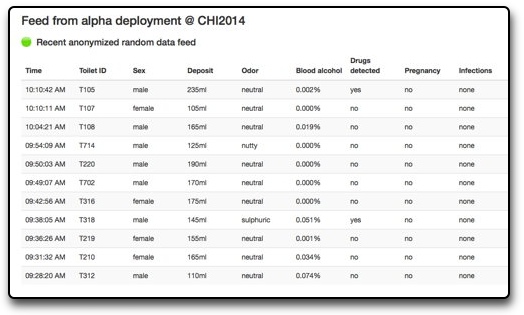 Smart Toilets are a real thing. For instance, back in 2009, Toto unveiled the Intelligence Toilet II that can perform in-home urinalysis, allowing people to monitor health issues they might have. So it was plausible, even if somewhat creepy, that all the public toilets at the conference had been fitted with sensors.

However, it all turned out to have been a hoax, designed by the "Critical Making Hackathon." Anyone who tried to email Quantified Toilets received back an auto-reply informing them that, "As you may have worked out, Quantified Toilets is indeed a fake company and all data reported were equally fake. It was a thought experiment at CHI 2014, designed to engender thought and discussion regarding the issues of surveillance, data, and privacy."

Link: Jennifer Golbeck, "What a Toilet Hoax Can Tell Us About the Future of Surveillance." theatlantic.com.