The Quahaug-Dropping Seagulls of Martha’s Vineyard 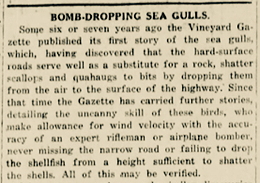 Seagulls have learned that they can break open quahaugs (hard-shelled clams) by dropping them from great heights onto hard surfaces such as roads or rocks. This is a well-documented behavior. But in 1932, the Vineyard Gazette reported that seagulls at Martha's Vineyard had learned an even more remarkable trick. They were killing rats by deliberately dropping quahaugs on them, and then feasting on the dead rats.

As reported by the Vineyard Gazette:


Soaring aloft with a heavy quahaug in their beaks, they mount to an unusual height, and hovering and shifting their position, gauging the wind and drift to a nicety, they drop the shellfish with a precision that almost never fails to connect with the rodent below, knocking it unconscious or killing it outright on the spot, whereupon the gulls descend and feast on fresh meat.
The paper added that these "bomb-dropping gulls" were the first ever to be reported, and noted that "army aviators may pick up some valuable hints by studying these birds and their methods."

This unusual avian behavior gained wide coverage in the media. However, as Curtis MacDougall noted in Hoaxes

(his classic 1940 study of hoaxes and "deliberately concocted untruth"), the story seems highly suspicious. While it's possible that some rats had accidentally been killed by quahaugs falling from the sky, the idea that the gulls were purposefully aiming the shellfish at the rodents stretches credibility. At the very least, it's definitely not a behavior that has ever been reported elsewhere.

MacDougall offered the story as the kind of tall tale that was frequently run by small newspapers, with the goal of boosting local tourism by getting the name of the town or region reported in papers nationwide. Such stories were rarely questioned because, wrote MacDougall, "the average person scans his newspaper indifferently and doesn't ponder over the plausibility of an unusual item which has no personal effect upon him."

Some six or seven years ago the Vineyard Gazette published its first story of the sea gull, which, having discovered that the hard-surfaced roads serve well as a substitute for a rock, shatter scallops and quahaugs to bits by dropping them from the air to the surface of the highway. Since that time the Gazette has carried further stories, detailing the uncanny skill of these birds, who made allowance for wind velocity with the accuracy of an expert rifleman or airplane bomber, never missing the narrow road or failing to drop the shellfish from a height sufficient to shatter the shells. All of this may be verified.

Other newspapers have made similar discoveries about gulls in various places, and it has become quite the seasonable thing for them to carry an account of the activiites of these natural sky riders whenever the shellfish are easily obtainable and attract the birds. But the Gazette now presents a new angle on the Vineyard seagulls, together with the solution of a mystery that has for long been a puzzle to islanders.

For several years it has been noticed by passersby on the Edgartown-oak Bluffs road that in the vicinity of Anthiers Bridge there are apt to be found the mortal remains of large rats at very frequent intervals. Where they come from, or what causes their death, has been a subject for discussion, as in many cases the carcasses are found where the wheels of passing cars could not have struck them, and moreover, they always bear the appearance of having been more or less mangled and torn. It has remained for Capt. Chester Robinson to solve the mystery, which the Gazette now publishes.

According to the captain, who is well versed in natural history, and has spent much time in observing the activities of sea birds, the ordinary sea gull is fond of rats and mice. The remains of shellfish, scattered along the road in this locality, act as bait, attracting these rodents from long distances. They hide in the beach grass when cars or pedestrians approach, but when the highway is clear they will scamper about the road, eating the fragments of scallop or quahaug that they find in the emptied shells.

At this juncture the highly efficient gulls get in their skilled and deadly work. Soaring aloft with a heavy quahaug in their beaks, they mount to an unusual height, and hovering and shifting their position, gauging the wind and drift to a nicety, they drop the shellfish with a precision that almost never fails to connect with the rodent below, knocking it unconscious or killing it outright on the spot, whereupon the gulls descend and feast on fresh meat.

The Vineyard may justly claim the first actual bomb-dropping gulls ever to be reported to date, and army aviators may pick up some valuable hints by studying these birds and their methods.

[Text of the Vineyard Gazette's article, as reprinted in The Waterloo Press - June 9, 1932]