Earlier this month (May 2015) a news story went viral claiming that a scientific study had found some beards contain "more poo than a toilet" (as the Mirror phrased it). 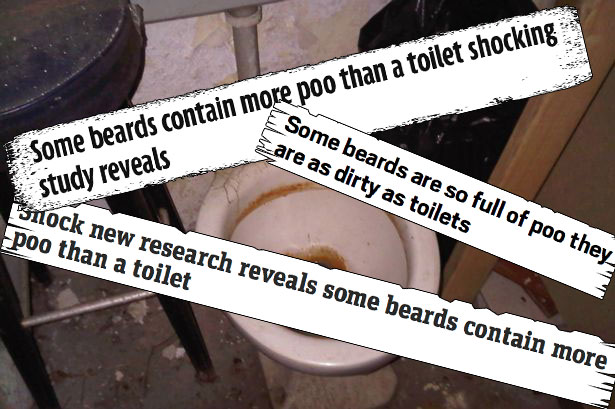 The study was said to have been conducted by John Golobic of Quest Diagnostics in New Mexico who swabbed a number of beards searching for bacteria and found that a few of them contained surprisingly high levels of bacteria, including the kind of bacteria found in fecal matter.

The debunking of this study soon followed. For instance, Nick Evershed of The Guardian pointed out the following:


Which is to say that there's no reason to doubt what John Golobic found in the swabbed beards. But the way the media reported his findings was unnecessarily alarmist.

Doubtful News made an interesting comment. They noted that the way the "poo in beard" story went viral confirms research which suggests that the more disgusting a story is, the more likely people are to share it, no matter how unlikely or ridiculous a story is. "Researchers think that the strong emotions provoked by disgust compel us to share with others to compare reactions and to confirm or establish what is socially acceptable."


The 1912 'Germ in Beards' media scare
What occurred to me as I read the "poo in beards" story was that it sounded familiar. And then I remembered why. When I was doing research for my second 'weird experiments' book, Electrified Sheep, I came across an experiment conducted in 1912 by a French physician, Professor Durand. This experiment, and the media reaction to it, was surprisingly similar to the recent 'poo in beards' story.

Durand wanted to find out if more bacteria are transmitted when a woman kisses a bearded man, as opposed to a clean-shaven one. So to find out, he enlisted the help of his two lab assistants: one bearded, the other smooth-faced.

He instructed the two men to walk through the streets of Paris, in order to expose them both to a full complement of germs, and when they returned they each took turns kissing a woman who had earlier been "thoroughly sterilized." After each kiss, the professor swabbed the woman's lips and transferred the microbes to a petri dish. (He re-sterilized her between kisses as well.) He then let the bacteria grow for four days in a culture medium.

The result: in the bacterial crop from the whiskered man's kiss he found a disgusting brew of filth and disease:

Just like today, this experiment yielded some sensational newspaper headlines. For instance, the Washington Post warned its readers to "Shun the Mustache Kiss!" While the Chanute Daily Tribune warned about "The Danger of Whiskers -- Girls should not kiss unshaven lips." So I guess the more things change… 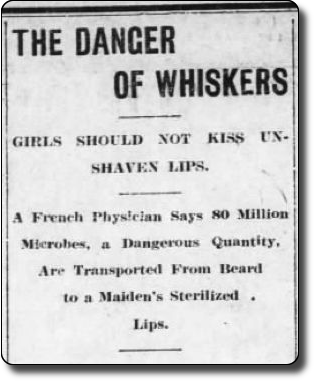