Did Edgar Allan Poe play an April Fool's day joke on the residents of Baltimore? 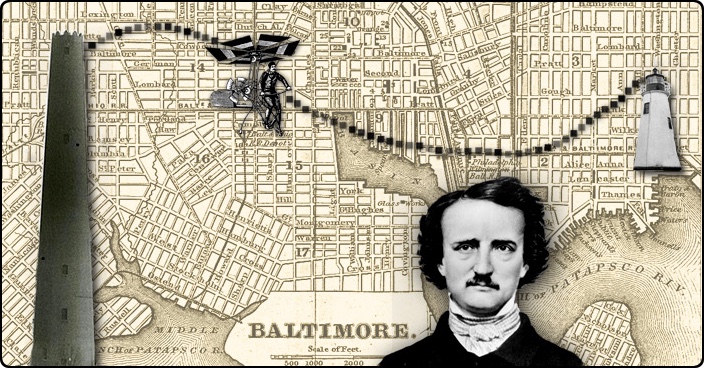 Edgar Allan Poe enjoyed hoaxes. He authored six of them himself, and he also spent time trying to debunk the hoaxes of others (such as the hoax of Maelzel's Chess Player).

But was Poe responsible for only six hoaxes? For over a century a story has circulated claiming that Poe, as a young man, perpetrated a seventh, lesser-known hoax. It's said to have been an April Fool's Day hoax that he pulled off while living in Baltimore in his early twenties.

Several biographies of Poe describe this hoax, and the story of the incident has circulated in Baltimore for decades. If true, it would be of interest because it would have been Poe's first hoax, and it would foreshadow some of his later works.

But did Poe really author this seventh hoax? Below I examine the details of the story, but the answer (for those who want to cut right to the chase) is that, no, there's not enough evidence to link this hoax to Poe. In fact, we can't even say whether the hoax happened at all.


The Story of the Hoax
The story goes that in late March, around about 1831 (or perhaps 1829), Poe placed a notice in a local Baltimore paper (possibly William Gwynn's Baltimore Gazette and Daily Advertiser) announcing that on the morning of April 1st a man would leap off the top of the recently built Phoenix Shot Tower and, by means of his newly invented flying machine, fly to the Lazaretto Point Lighthouse, a distance of two-and-a-half miles.

At the time, the Shot Tower was the tallest structure in the United States, standing 234-feet high. It was used to manufacture gunshot by dropping molten lead from the top. The lead fell through perforated pans into water at the bottom, forming into perfect spheres as it fell.

Naturally the idea of a man flying from the top of the tower generated enormous excitement, so a large crowd gathered to see the spectacle. However, no aeronaut ever appeared, causing the crowd to grow upset and unruly, until they realized what day it was and dispersed.

Poe reportedly published a card of regret in that afternoon's paper, explaining that the aeronaut had been unable to keep his engagement because one of his wings had gotten wet. 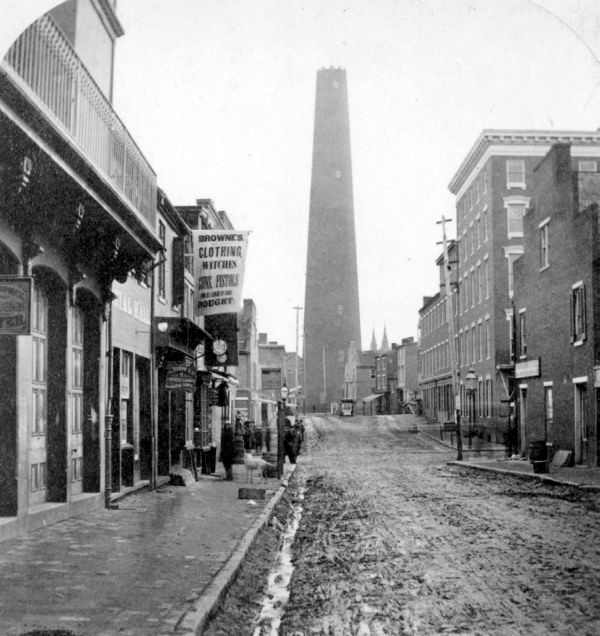 Where Does This Story Come From?
The earliest printed report of this story that I've been able to find is in Rev. William J. Scott's Lectures and Essays, published in 1889.

The details of the story, as Scott told it, are close to those I give above, except that Scott didn't mention flying to the lighthouse. 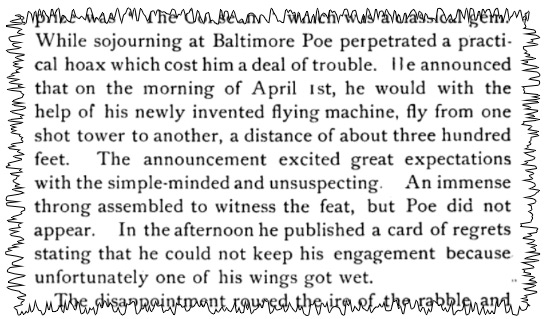 clipping from Lectures and Essays, 1889

The story next shows up in American Authors: a hand-book of American Literature (1902) by Mildred Rutherford, who quotes directly from Scott.

Finally, Poe biographer Mary E. Phillips described the hoax in her 1926 book Edgar Allan Poe: The Man. In Phillips we find the detail about the man flying from the Shot Tower to the Lighthouse.

Meanwhile, the story was evidently circulating as legend in Baltimore itself. In 1995, an exhibit at the Shot Tower featured a mannequin of Poe which spoke to visitors, telling them about the April Fool hoax.


Is the Story True?
There's one piece of evidence that might connect Poe to the hoax. On May 6, 1831 he wrote to William Gwynn, owner of the Baltimore Gazette, asking for a job. His letter read:


DEAR SIR — I am almost ashamed to ask any favour at your hands after my foolish conduct upon a former occasion — but I trust to your good nature.

I am very anxious to remain and settle in Baltimore, as Mr. Allan has married again and I no longer look upon Richmond as my place of residence. This wish of mine has also met with his approbation. I wish to request your influence in obtaining some situation or employment in this city. Salary would be a minor consideration, but I do not wish to be idle. Perhaps (since I understand Neilson has left you) you might be so kind as to employ me in your office in some capacity. If so I will use every exertion to deserve your confidence. 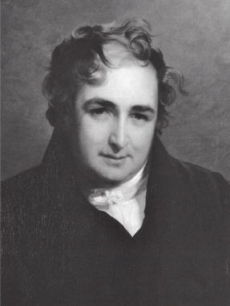 When Poe mentions his "foolish conduct upon a former occasion" could he be referring to the April Fool hoax? Maybe. But then again, probably not because it's not clear when Poe could possibly have pulled off the hoax.

However, on April 1, 1829 Poe was in Virginia, waiting to be discharged from the army. He received his discharge on April 15. So he couldn't have perpetrated an April Fool hoax in Baltimore that year.

On April 1, 1830 Poe was at the Richmond home of his foster father, John Allan, trying to arrange admittance into West Point. (He was admitted several months later.)

Only in 1831 was Poe actually in Baltimore on April 1. He had arrived there earlier that year and was living with his aunt, Maria Clemm. 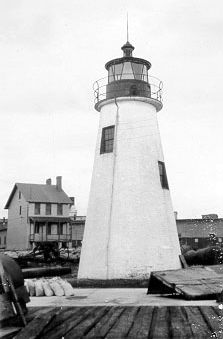 But if Poe perpetrated the hoax in April 1831, it seems odd that he would write to Gwynn only a month later, seeking a job. The tone of the letter makes it sound like the "foolish conduct" had occurred much further in the past.

Another problem is that in April 1831 the Lazaretto Point Lighthouse hadn't been built yet. Construction of it only commenced later that same year. But this is a minor problem, since it's reasonable to assume that the lighthouse could have been added to the tale later as a literary embellishment.

Perhaps Poe didn't publish the hoax notice in Gwynn's paper. He could have posted notices around town instead. In which case, his letter to Gwynn would be a red herring.

Or perhaps the hoax occurred after 1831. Poe did remain in Baltimore until 1835.

These are possibilities, but in either case, there's a larger problem, which is that there are no printed references to the hoax at all until 1889, almost sixty years after it supposedly happened.

In 2002, Alan Gephardt, executive director of Carroll Museums (the organization that maintains the tower as a museum), combed through old Baltimore newspapers trying to find any reference to Poe's April Fool hoax — and he found nothing. As reported in this Oct 22, 2002 Baltimore Sun article (if Gephardt ever published an account of his research I'm not aware of it):


The Shot Tower's history has been dusted off, thanks to the sleuthing of Gephardt, 46, who scoured old newspapers...

Another tale is local urban legend, Gephardt has concluded. Poet Edgar Allan Poe, it was said, once claimed someone would "fly" off the tower and land safely. As best Gephardt can tell, Poe never said it, and nobody was dumb enough to try the stunt.
So we have no evidence, beyond hearsay from decades later, that this hoax happened at all.


What Inspired the Legend?
If the hoax is merely an urban legend, then what might have inspired it? There are several possibilities.

First, the hoax could have occurred at some point, without any involvement by Poe, but no record of it remains in papers from that period. This is quite possible since newspaper holdings from that period tend to be a bit hit-and-miss. And a prank might not have been deemed newsworthy anyway. The hoax might then have been later attributed to Poe, as he was Baltimore's most famous literary hoaxer.

Second, the tale bears some similarity to a flying machine hoax that happened in Pittsburgh in 1846. So perhaps the Pittsburgh hoax inspired the Baltimore legend.

The Pittsburgh hoax (which we have contemporary descriptions of in newspapers) involved a notice that appeared in the Pittsburg Dispatch announcing that the inventor of a "pair of wings" would give a demonstration of his device by leaping from the top of the Holland Street bridge, flying over the Allegheny River, and then returning to the place from which he had started. A large crowd gathered, and at the appointed hour a mysterious man appeared, walked to the center of the bridge, and with a flourish released a goose from a cloth bag. The goose flew honking up into the air.

Perhaps as the story of the Pittsburgh hoax was retold over time, details got mixed up. The setting could have been transferred to Baltimore's Shot Tower (a more dramatic structure to leap off of), the goose omitted, and Poe added. It could have happened.

However, I think that the first possibility (that such a hoax really did occur in Baltimore) more likely. Tall structures often served as the focus for April Fool's Day pranks — as have landmarks of all sizes. For instance, on April 1, 1858 a notice ran in Chicago papers claiming that at one o'clock a "famous gymnast" would ascend the steeple of St. Paul's Church from the outside "and stand upright on the summit, returning the same way to the ground — all to be accomplished in the space of twenty minutes."

As the tallest structure in America, the Phoenix Shot Tower would have been an obvious setting for an April Fool's Day prank. Actually, it would be kind of surprising if there wasn't an April Fool hoax associated with it. But the fact is that we don't have any primary source evidence to prove that such a hoax occurred. So until such evidence surfaces, the April 1st Flight from the Shot Tower has to remain in the category of legend.

I haven't been able to find any contemporary accounts of Horney's Great Leap. So I'll assume that this tale is also an urban legend.

So if the shot tower hoax is a legend, does the reference to "foolish conduct upon a former occasion" suggest that there's some other unknown Poe hoax? Is there any indication of what "foolish conduct" he's talking about? Might make an interesting research project.
Posted by Ross  on  Thu Jun 02, 2016  at  05:22 PM
Ross -- no one seems to know what this "foolish conduct" might refer to.

Mary Phillips, in her 1926 bio of Poe, has this brief discussion of it:

>>Poe's reference to "foolish conduct" seems to have been in some prior to West Point, misty, 1829 connection with Mr. Gwynn, obtained through Neilson Poe. Dates do not seem to affirm it was a possible print in Mr. Gwynn's paper — of Poe's April 1st flying hoax advent, from the old Shot Tower to the Lighthouse. This (hoax) notice may have been posted up in Mr. Gwynn's newspaper office. The crowds who went to see this daring feat after hours of waiting dispersed in no good humor with the hoax-maker.<<