On Saturday (June 9) thousands of Iranians stood outside on rooftops looking up at the moon. They were there because of a rumor spread by email, websites, and social networks promising that Pepsi was going to project its logo onto the surface of the moon. The rumor was false. Link: observers.france24.com

Some Iranians got their revenge by drinking Coke. Others created Pepsi-moon parody videos and images.


There's a bit of history to the idea of ads projected onto the moon. Back in 1999, Coca-Cola actually considered the idea of using lasers to project a Coke logo onto the moon. The idea was dreamed up by one of their marketing executives, Steve Koonin. They hired scientists to put the plan into effect, and spent quite a bit of money before abandoning the idea. The problem: It would have required incredibly powerful lasers to do it, and the FAA wouldn't allow the use of such powerful lasers because of the possibility they might interfere with aircraft.

Then, in 2008, Rolling Rock beer ran a hoax campaign claiming that they were going to project the Rolling Rock logo onto the moon during a full moon, on March 21, 2008. They promoted the idea on billboards, in TV ads, and through the website moonvertising.com (which they've since abandoned). 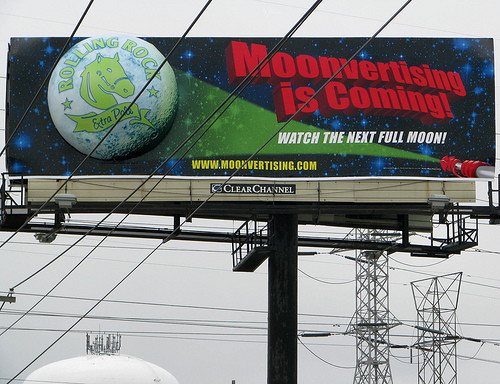 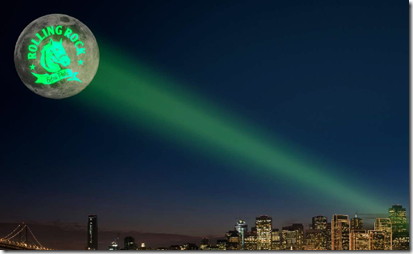 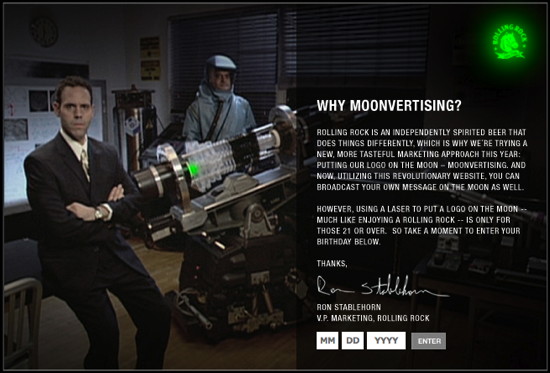 The NY Times ran a brief article about the hoax campaign in which they touched on whether moonvertising would be technically possible:


According to Jim Garvin, the chief scientist at NASA’s Goddard Space Flight Center, moonvertising is possible, if impractical for a number of reasons. While scientists have bounced lasers off the moon, they illuminated an area only about the size of a tennis court. “In order for an advertisement to be seen by people on earth,” Garvin says, “the laser light would need to cover an area about half the land size of Africa,” a challenge because the moon’s surface is dark and fairly nonreflective.
Iran itself also has a history of moon-image hoaxes. Back in November 1978, a rumor swept through Iran alleging that the face of the Ayattullah Khomeini was visible on the moon. This rumor has been analyzed in a paper by Shahla Talebi:


In late November of 1978, as millions of Iranians awaited for the return of Ayattullah Khomeini form exile, a rumor swept the country that his face could be seen in the moon. In great excitement, many gathered on the rooftops to show one another what they “saw.” Although the rumor was officially denied, it had had already acquired millions of legs, and thanks to technology, it soon reached almost every corner of the country. It had taken a life of its own. The emotional ambiance of that particular night of “seeing” was so immensely intense and the claim so unwaveringly firm that those who “could not see” said otherwise.

And let's not forget a similar rumor that spread in America a few years ago, which got thousands of people to stand outside, holding candles, and looking up at the sky. It was following 9/11. The rumor promised that a NASA satellite was going to take a photograph of the entire nation illuminated by candlelight.

Edit: I just remembered another moon rumor, one which I discuss in Electrified Sheep. Back in 1957, a rumor spread that the Soviets were going to explode a nuclear bomb on the surface of the moon on November 7, and that the flash would be visible on Earth. This date was supposedly chosen both because it was the 40th anniversary of the Bolshevik revolution and because a lunar eclipse was going to occur then, making the flash more visible. This would have been a form of 'moonvertising' on the part of the Soviets. A way for them to display their technological superiority on a canvas visible to the entire world.

There was near hysteria in America as the date approached. When the day arrived, many astronomers trained their telescopes on the moon, waiting for the flash. But it never came. The Soviets probably would have done it, if they could have, but at the time it was beyond their abilities.

There are some intriguing parallels between the 1957 Soviet Nuke rumor and the 2012 Iranian Pepsi-logo rumor. In both cases, people were projecting their fears onto the surface of the moon. In 1957 America, the challenge posed by Soviet power and the spread of communism was the great fear. For Iranians in 2012, American corporate power and global dominance is their great fear. 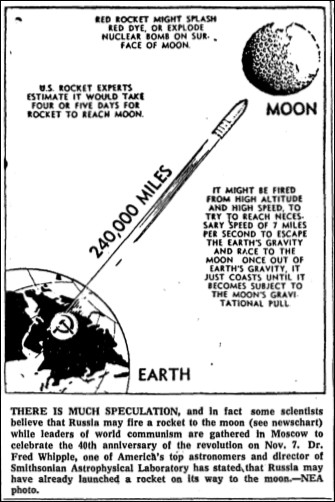 From the Freeport Journal-Standard, Nov 6, 1957

There is also this entry from Wikipedia:

The first time I heard of advertising on the moon was:

"In Robert A. Heinlein's 1951 novella The Man Who Sold the Moon the protagonist raises funds for his lunar ambitions by publicly describing means of covering the visible lunar face in advertising and propaganda, and then taking money not to do so."

I loved that story.
Posted by Chakolate  on  Wed Jun 13, 2012  at  05:46 PM
French comix-artist Andre Franquin made comix-book "Z comme Zorglub" (in english "Z is for Zorglub") in 1961, in his famous "Spirou et Fantasio" -series. In the book arc-villain Zorglub want to make Coca-Cola advertisment onto moon. He succeed - almost. Andvertisment was made in reverse letters. You can see picture of that f.ex. http://www.otakia.com/35273/produit/bd/tome-51-alerte-aux-zorkons-spirou-et-fantasio-critique-test-resume-anecdotes/attachment/z_comme_zorglub_lune_coca-cola/