It's been a while since I've done a pareidolia roundup, so a few of these are a couple months old.

Virgin Mary in Salsa Stain
"Elvia Alvarez was recently using her blender to make salsa in her kitchen. Some of the salsa splattered onto the wall, creating what Alvarez says is the image of the Blessed Virgin Mary. Since this happened. Alvaraz says it's a sign that people need to be nicer to each other." Funny. I thought it was a sign she needs to be more careful when making salsa.

Jesus in Guitar
Employees at International Music and Sound in Ludington, Michigan are seeing the face of Jesus in the grain of a guitar. The guitar, which is made out of maple wood, is manufactured by the Washburn Company.

Jesus on Doggie Door
Roger Bowman was about to put his dogs down. But then he saw that the face of Jesus had formed on their doggie door, so he changed his mind. Now he's decided to sell the divine doggie door on eBay. Bidding is currently at $1185. No word on what will happen to the dogs once the door is gone.

Celestial Smiley Face
Astronomers have been abuzz about a rare alignment of Venus, Jupiter, and the Moon that creates a giant smiley face in the night sky. Is no one going to say it looks like Jesus? 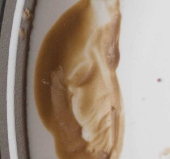 Jesus Face in melted chocolate cookie
"Lois Preira, of Ullswater Road, was enjoying a cookie and a cup of tea when she noticed a face in the melted chocolate on the plate." Whose face could it be? Why Jesus, of course!

Obama on Toast
Some guy claimed that the face of Barack Obama "miraculously appeared" on a piece of wonder bread he was toasting, the day after Obama was elected president. Even more miraculous, he managed to sell the "Hope Toast" on eBay for $205.

Jesus or Shakespeare on Banana Peel
Theresa Smith writes: "I was at work getting ready to eat my banana... I peeled it and happened to look at it and noticed a face on the peel! But what I saw was just half the face.. once I put the peel back onto the banana I couldn't believe what I saw! It's Jesus on the banana! It could be Shakespeare too depending on your point of view." 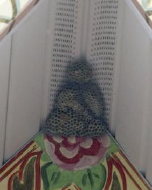 Buddha in Wasp's Nest
Cambodian Buddhists in Rochester, Minnesota noticed that a wasp's nest built in the eaves of their temple looked like Buddha. One monk, Moeun Ngop, said that the wasps were trying to communicate Buddha's message. Would that message be, it's time to hire an exterminator? 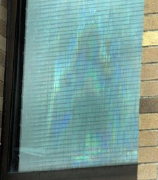 Virgin Mary in Hospital Window
Back in September, crowds gathered outside Mercy Medical Center in Springfield, Massachusetts to see what looked like the image of the Virgin Mary in a second-story window. But one of the Sisters of Providence, who dropped by to check it out, was actually kinda skeptical. She said it might be nothing more than "the illusions which light and shadows can cause."

The face in the guitar looks more like the Master Control Program from Tron, or, to continue the pareidolia theme, South Park's version of Moses (who is designed to look like the MCP).

Mind you, for +US$1,100 I'm pushing my Cattle dog in and out the door every opportunity.
Posted by Joel B1  in  Hobart, Tasmania  on  Thu Dec 04, 2008  at  12:18 AM
Id have to say if I were Jesus i would be insulted that people think I look like ugly diformed plotches lol
Posted by Tim  on  Thu Dec 04, 2008  at  01:17 AM
What it tells me:
- Virgin Mary loves Mexican food.
- Washburn guitars are great, and you can use them to play Christian songs (though you don't have to).
- Doggie Door Jesus is winking, but yet frightening. Actually he looks more like a vampire ready to bite.
- Chocolate Jesus is some kind of scary alien.
- Banana Jesus looks like some carved mask from New Guinea.
- Toasted Bread Obama didn't appear on this piece of bread just by chance, if you see what I mean (not so hard to do).
- And Window Pane Mary is actually Jesus. But he shaved his beard. 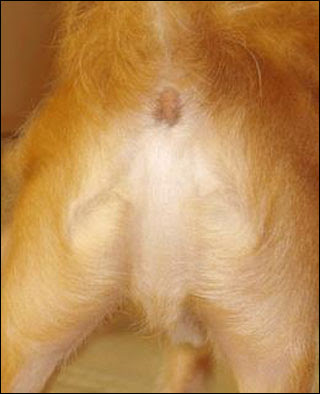