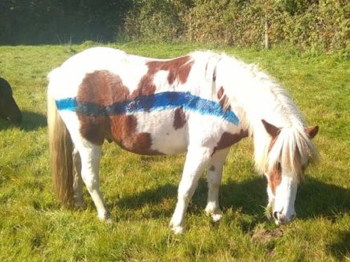 In 1965, a Copenhagen newspaper ran an April Fool hoax claiming that the Danish parliament was going to require all black dogs to be painted white, in order to increase road safety by making the dogs more visible at night.

Fast forward to 2015. The Dartmoor Livestock Protection Society has launched a scheme to paint ponies with reflective blue stripes in order to allow motorists to see them more easily at night. The idea is that "motorists would not see the animal, but an 'alien glow' which should slow them down." [BBC News, 10/2/2015]