Poodle Clipping As An Olympic Sport

Was poodle clipping included as an official competition in the 1900 Summer Olympics? 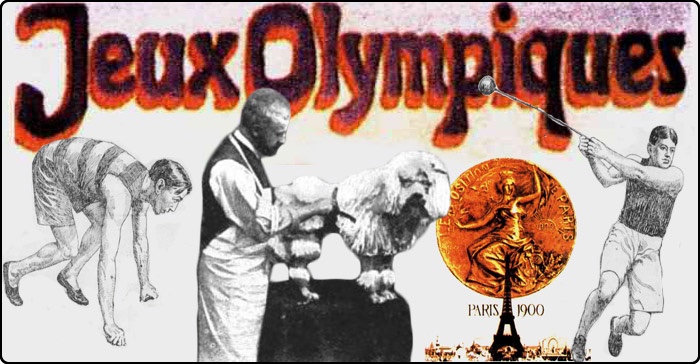 In the months preceding the 2008 Olympic Games in Beijing, Christopher Lyles wrote a daily "Beijing Countdown" column for The Daily Telegraph in which he would note how many days remained until the Games, and then offer an interesting Olympic fact related to that number.

For instance, on March 29, 2008, with 131 days to go until the games, Lyles observed that 131 was also "the number of number of competitors who took part in last November's 'first-past-the-post' US Olympic marathon trial for this year's Games."

On March 31, with 129 days remaining, he reported that the LZ 129 Hindenburg was remembered for its "brooding presence at the opening ceremony of the 1936 'Nazi' Games in Berlin," as well as for being destroyed by fire in 1937.

And on April 1, with 128 days remaining, Lyles delved into the curious history of Olympic poodle clipping. Here's his full column from that day:


128: The number of competitors who participated in the poodle-clipping event at the 1900 Olympics in Paris. The event was held in the leafy environs of the Bois de Boulogne and it was the only occasion that it featured as an Olympic discipline.

This, no doubt, came as a relief to Baron Pierre de Coubertin, the French founding father of the modern Olympic movement, who had opposed its inclusion, but was outvoted by his International Olympic Committee colleagues. The gold medal was won by Avril Lafoule, a 37-year-old farmer's wife from the Auvergne region of France, who successfully clipped 17 poodles in the allotted two-hour time frame. The poodle-clipping competition, held on April 1, was watched by 6,000 spectators, one of the larger audiences at the most chaotic Olympic Games of all.
The 1900 Olympic Games
It's true that a number of unusual events were included in the 1900 Summer Olympics, which were the second summer games since the modern Olympics began in 1896. In these early years of the modern Olympics, there was a lot of uncertainty about which sports should be Olympic events, so some odd stuff got thrown into the mix.

For instance, the 1904 summer games included competitions such as greased-pole climbing and mud fighting. (They were events set aside for "primitive" tribes from Africa and South America.) And the 1900 games, as Wikipedia notes, included ballooning, croquet, Basque pelota, and underwater swimming.

But did the 1900 games include poodle clipping, as Lyles reported?

No. His column for that day was an April Fool's Day joke. In hindsight, this seems like it should have been obvious. In fact, I can't find any evidence that there's ever been a poodle-clipping competition anywhere. Though perhaps some dog show once held such an event. I don't know!


A Slow-Burning Hoax
Among the crop of April Fool hoaxes that came out in 2008, Lyles' effort initially didn't receive much attention. Most accolades that year went to the BBC and its remarkable pseudo-documentary about flying penguins, as well as to YouTube, which "rickrolled" all of its visitors.

But Olympic poodle clipping turned out to be a slow-burning hoax with a payoff that occurred months, and even years, later. This is because Lyles' poodle article began circulating online where it was soon stripped of the context that it had been published on April 1. As a result, it quickly ascended to the status of a certifiable fact, despite the clue about gold-medal winner "Avril Lafoule." And when the summer games began on August 8 of that year, such an odd fact proved to be irresistible to reporters.

I'm not sure which paper first fell into the Olympic poodle clipping trap, but once one did, many others quickly followed, like a row of dominoes being knocked down, one after another.

Among the media outlets that reported Olympic poodle clipping as a true fact in August 2008 were: The Sunday Times, The Sun, the Ottawa Citizen, China Daily, the BBC's live Beijing blog, the Poodle and Dog blog, and the Guardian.

The Telegraph soon realized what was going on, and so on August 15 Andy Hooper of the Telegraph posted an article detailing the hoax and resulting confusion ("How Telegraph struck Olympic poodle-clipping gold in Beijing").

That temporarily put an end to the career of Olympic poodle clipping as a true fact. But, of course, the Internet never forgets anything. Factoids, whether true or false, just get temporarily plowed under, only to reappear years later, as resilient as ever.

So in 2012, with another Olympic summer games on the horizon, reporters once again came across the remarkable story of Olympic poodle clipping and offered it to readers as weird-but-true news.

For instance, it appeared in the Evening Standard's list of 100 things you need to know about the 2012 Olympics, as well as in the North Devon Journal ("Let's get out the shears for olympic poodle-clipping").

With the 2016 games fast approaching, will we see the return of Olympic poodle clipping as a true fact? Time will tell, but I wouldn't bet against it.