True or False: Not all dogs can bark

In his 1930s newspaper column, John Harvey Furbay (aka The Debunker) wrote that it was a myth that all dogs can bark:


"Barking seems to be an acquired trait in dogs, for their wild ancestors — probably wolves — could not bark, and some present-day species of dogs cannot bark. The Australian dog, called the dingo, is found both in the wild and in the domesticated states, and none of them is able to bark."
— The Emporia Daily Gazette - February 25, 1935
Was he correct? When I came across his column and got curious about the question, I thought it would be easy enough to answer. But it turns out that it's not an easy question. In fact, it's definitely COMPLICATED! So much so, that I've been unable to find a definite answer as to whether all dogs can bark. I lean towards the opinion that all dogs CAN bark, which would mean that Furbay was wrong. But I can't say this for sure.

However, whether Furbay was right or wrong has nothing to do with the wolves and dingoes that he mentions (about which he was definitely wrong). Instead it comes down to where one stands in the scientific controversy surrounding a breed of "barkless" dog known as the basenji.


What is a bark?
Before wading into the basenji controversy, it's worthwhile to define exactly what a bark is. In the 2014 article "Auditory Communication in Domestic Dogs," the authors (Taylor, Ratcliffe, McComb, & Reby) define a bark as a "stereotypical vocalisation" of domestic dogs:


Barks are short, plosive signals that can be produced as part of a sequence or in isolation, with an F0 range that can vary considerably across breeds, individuals, and contexts. The acoustic output is achieved by the dog lowering the larynx and raising the velum, thereby closing off the nasal passage. The sound is then emitted from the mouth, with an open jaw.
Although barking is typical of domestic dogs, Taylor et al. note that other canids do bark including (and contrary to what Furbay believed) wolves, dingoes, coyotes, jackals, and foxes.

Furbay probably got the idea that wolves don't bark from Charles Darwin, who believed that wolves would only bark if they learned to do so from dogs. However, modern researchers agree that wolves definitely do bark in their natural environment, but they do so rarely and only in specific aggressive situations as a form of warning or defense. Wikipedia, citing research by R.M. Schassburger, notes that wolf barks comprise only 2.3% of all wolf vocalizations.

Australian dingoes also definitely bark, despite what Furbay thought. However, again from Wikipedia, "only 5% of the observed vocalisations were made up of barking." 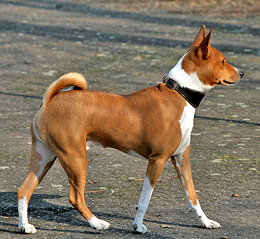 The question of whether all dogs bark only gets complicated when we come to the "barkless" basenji.

The basenji comes from central Africa. It's descended from the Indian plains wolf (Canis lupus pallipes), as are dingoes. Left to their own devices, basenjis typically won't bark, which makes them great pets for people in apartments. Instead, basenjis produce, as Taylor et al. put it, a "high-pitched, harmonic call known as a 'yodel' or 'baroo'."

Or rather, I should say that basenjis won't bark much, because there are plenty of basenji owners who attest that their basenjis do bark. YouTube offers quite a few examples of barking basenjis.


Also, in the 1965 work Genetics and the Social Behavior of the Dog


basenjis (or at least the strain which we have) are not completely barkless. When sufficiently excited, they will bark. Table 11.5 shows that basenjis barked during 20 per cent of the opportunities given them during the dominance test, whereas the cocker spaniels barked during 68 per cent. The basenjis usually gave only one or two low “woofs” when they did bark, the average number being about two. At 11 weeks of age, the largest number of barks given by any basenjis during the dominance test was 20 and the next highest number was 12. 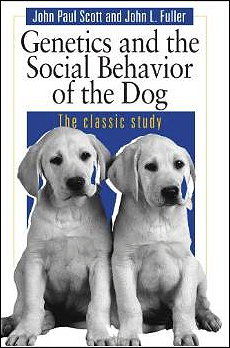 Scott and Fuller theorized that basenjis can bark, but they require a very high threshold of stimulation before they will bark.

So if basenjis can bark, doesn't this settle the question in the affirmative of whether all dogs can bark? Unfortunately not. Because there are some who argue that basenjis actually physically cannot bark. For them, the key phrase in the passage from Scott and Fuller quoted above is "the strain which we have." These proponents of the barkless basenji argue that Scott and Fuller must not have been examining a pure breed of basenji, and that the same goes for all the basenji owners who report that their dogs bark. A pure basenji, they insist, not only will not bark, but cannot bark.

The evidence for the barkless basenji comes from several anatomical studies conducted in the 1970s on four certified pure basenjis born in central Africa, or directly descended from a pure basenji. The owners of these basenjis swore that their dogs never barked.

The studies (done after the dogs died natural deaths) were conducted by Dr. L.E. St. Clair of the College of Veterinary Medicine at the University of Illinois and by Dr. R.R. Ashdown of the Royal Veterinary College. Both researchers found that the basenji had an unusual larynx with a shallow laryngeal ventricle unlike what is found in all other dogs. The doctors speculated that this anatomical feature was the cause of the dog's barklessness.

Dr. Ashdown cautioned that his findings were inconclusive and that it wasn't absolutely certain that the anatomy of the basenji's larynx was the cause of its barklessness. Nevertheless, his research has been seized upon by proponents of the Barkless Basenji theory as providing a scientific basis for their belief. (The Basenji Club of America has a PDF file that contains more info about the barkless/barking basenji controversy.)

And that's where the matter lies. On the one hand we have some basenji (perhaps not pure) that definitely do bark. On the other hand, we have a handful of pure basenji, whom their owners swore never barked, found to have an unusual larynx that credible researchers speculated might have prevented them from barking.

I suppose the issue could be settled once and for all if anatomical studies were performed on basenjis that bark to determine if they share the same unusual larynx. If they do, this would suggest that basenji can bark, but they choose not to. However, to my knowledge such a study has not been done.

My strong hunch is that all basenji (and therefore all dogs) probably can bark, and that the ones that don't probably don't do so for behavioral reasons, rather than biological ones. But hunches aren't the way science works. So until someone does the study on barking basenjis, a question mark will hang over the question of whether all dogs can bark.

It is vanishingly unlikely that the Basenji descends from a different wolfy ancestor than other domestic dogs. They're all descended from the same European proto-wolf (not any current wolf species, since wolves continued to evolve while dogs did).

By the way, I am a member, but the "log on" or "sign on" link appears to have disappeared.
Posted by Carl  on  Wed Dec 03, 2014  at  04:47 AM
Carl -- I got that info from the article "Auditory Communication in Domestic Dogs" (linked to above). I just took their word for it because they seemed like a credible source.

But googling around, I found this 2010 article in USA Today about research suggesting descent from the Middle Eastern wolf:

The gene study broadly splits dog species into ancient breeds, such as New Guinea Singing Dogs and dingoes, which likely split from wolves 4,000 years ago, and more recent Victorian "fancy" breeds, such as the Yorkshire terrier. "The basenji, a breed of Middle Eastern origin, had a greater proportion of shared (gene types) with Middle Eastern wolves than any other domestic dog," the study says.
Most likely, wolves have periodically interbred with domesticated dogs, gene patterns suggest.