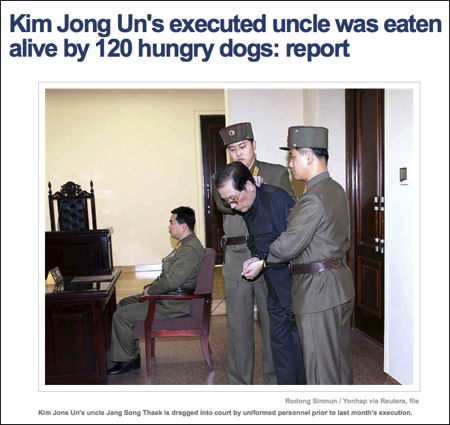 NBC News
A report is circulating, sourced to "a newspaper with close ties to China's ruling Communist Party" (according to NBC), alleging that North Korean leader Kim Jong Un had his uncle, Jang Song Thaek, eaten alive last month by a pack of 120 ravenous dogs. Gruesome stuff, if true.

But Max Fisher of the Washington Post cautions that there are good reasons to doubt this story. The report comes from a small Hong Kong newspaper Wen Wei Po, which has a reputation for sensationalism.

Somehow it got this incredible scoop just a day after the execution. No one else reported it, and Wen Wei Po cited no source. The rest of the media in Asia (including, most importantly, the media in South Korea which has the best sources inside North Korea), have ignored the story.

Fisher suggests that the official report, that Jang was executed by a firing squad, is far more plausible.

Update: So it looks like people have gotten to the bottom of this story and how it spread. Trevor Powell, a Chicago-based software engineer who's fluent in both Chinese and English, gets the credit for being the first to figure out exactly what happened.

This is the timeline of events:

1) On Dec 11, someone posing as the well-known Chinese satirist Pyongyang Choi Seongho posted a tweet (screenshot below) to Tencent Weibo (the Chinese equivalent of Twitter) describing how Jang Song Thaek had been devoured by ravenous dogs.

3) On Dec 24, the Singapore Straits Times published an English-language article referencing the claim that Jang had been fed to dogs. The article cited Wen Wei Po as the source, but failed to mention that Wen Wei Po had, in turn, cited a known satirist as its source.

4) Once the claim was in English, it snowballed across the world.

Powell offers this take on how the story spread:


To be fair, Wen Wei Po cited their source and the Straits Times cited their source and so on and so forth. What you have is a chain of sources of increasing credibility each quoting from a source that may be slightly less dependable. In all fairness, Wen Wei Po fairly openly, honestly, and unabashedly wrote an article around a social media report they were comfortable sharing in spite of its dubious source. The Straits Times article built on the Wen Wei Po piece by giving it a more official tone and failing to mention the social media source. From there it exploded around the world and none of the slew of articles that discussed the Wen Wei Po source mentioned the original source Wen Wei Po had cited.

Reuters reports that Wen Wei Po based their report on a post on Weibo (a Chinese version of Twitter) by a known Chinese satire account:
http://www.reuters.com/article/2014/01/06/us-korea-north-jang-idUSBREA050DP20140106