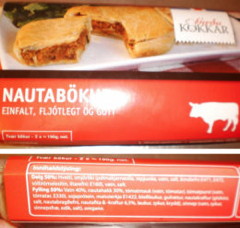 In response to the widening horse-meat scandal in Europe, Icelandic food authorities decided to conduct tests on some of their country's own food products. They didn't find any horse meat, but to their surprise they discovered that one brand of beef pie, Nautabökunni, contained no meat at all. Or, at least, the pies had "no mammalian DNA." Instead, the pies contained some kind of vegetable matter masquerading as beef.

The company that makes the pies says it's dumbfounded by the results, and has asked for more tests, questioning the accuracy of the initial ones. The co-owner of the company is quoted as saying, "I'm not saying that this is chock-full with mincemeat, but we use soya meat to supplement the meat and also use beef stock as seasoning. I know how the recipe is and this finding is therefore improbable."

I'm inclined to believe the guy. It's hard to get a meat taste with no meat at all. [links: icelandreview, mbl.is]

So I guess soya meat really IS 'meat'.
Posted by hulitoons  in  Abingdon, Maryland  on  Tue Mar 05, 2013  at  09:53 AM
Textured Vegetable Protein, or 'TVP' is a staple of meat-extenders/substitutes. Properly done, it tastes VERY much like low-quality ground beef, so it's not hard to imagine that a 'meat' pie could be actually meatless.

I think the smart thing to do would be to continue using the same supplier, and just relabel the pies as vegetarian!
Posted by Robin Bobcat  in  Californian Wierdo  on  Tue Mar 05, 2013  at  11:31 AM
Even if the CEO "Knows the Recipe" he could be being duped as much as anyone else. It's not uncommon for CEOs to not know what's going on until a scandal breaks out.

Imagine if every six months he tells his employees to "find a way to cut costs", and threatens to fire people if they don't. They'll find a way to cut costs, and not tell the CEO anything that would cause him to veto the plan.
Posted by AndyL  on  Tue Mar 05, 2013  at  09:20 PM
I think ”soy meat” usually don't contain any meat at all. The tried version I use to bye is probably just what is left over after making soy oil. Swedish supermarkets commonly offer soy based imitations of meat products. These may contain egg but if it contained any real meat vegetarians would make a public outcry. Here in Sweden vegetarians constitute about 5% of the population. However, they are as much heard of in the mass media as if they where 20%.

In the particular case of Nautabökunni we have a soy protein pie said to be seasoned with “beef stock”. Commercially available instant stock (bouillon cube/cooking base) tend to not contain much meat at all. The “meat stock” used in ready-made meals could well be similar. Additionally, ready-made meals tend to be heavily processed. If so the end result might be too little intact DNA left to be found by the testing method in question. At least this is a plausible explanation for the very unexpected find.
Posted by Lena Synnerholm  on  Sat May 18, 2013  at  12:01 PM
Commenting is not available in this channel entry.