Pathetic story of a Nigerian man whose kidney was stolen

The 'kidney thieves' urban legend has resurfaced in Nigeria, as evidenced by the story below which is circulating on Nigerian news sites (such as here and here).

This version of the tale has a slight twist. After having his kidney removed, the victim doesn't realize what's happened until weeks later. He doesn't even realize he's been cut open, because the closure of the incision was "perfectly done and skin was used to cover up the stitch." 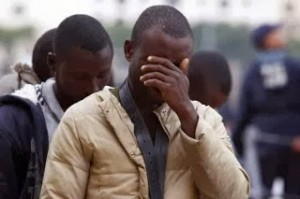 We saw this story and we thought it wise to share it. It's touching and shocking and we hope we all learn from it.

I'm 26 years old and last year after graduating from one of the Polytechnics in Nigeria, I couldn't get a job. I needed to travel out of the country to better my life and that of my family. I planned on going to Turkey but fell into the hands of dupes who gave me fake documents and I was thrown out of the Turkish embassy during my interview and almost got arrested.

Standing outside, I met an old acquaintance, a young guy I met through a mutual friend. I found myself telling him about my plight and how I had been duped into paying for fake documents.I told him how my dad sold his plot of land to ensure I traveled. How was I going to tell them their money went down the drain?

He then told me the best thing was to tell them I got the visa, so when my dad sends money for my flight ticket, I use it to go to Malaysia. He said he had an agent who would help me and also give me a job once I get there. He said several guys had gone to Malaysia too.

I told my excited parents that I got the Visa and would need money for my flight. I raised 600 thousand naira which was sent to the agent I had never met and was given a 1 month visa. I got to Malaysia expecting to see the agent but never did. It was 3 weeks, no job, and paying my hotel bill, I had exhausted all my money. The so-called agent I had been calling suddenly switched off his phone. It was one week to the expiration of my visa.

So I decided to step-out and find other Nigerians who could help me. I was unsuccessful as the two guys I knew way back in Nigeria were club bouncers and had no connections. Was shocked because they claimed to be big boys.

I was on my way back from one of my unsuccessful outings. I was wondering what to do when a short Indian man intercepted me. "Hello my friend you looking for a job? I have a job for you. How will you like to earn 3 thousand dollars a month? I was speechless" He told me "Lets go and have a drink and talk about it"

I was so happy. He took me to a spot not far from where we met. It was like a private house and I saw two other Black boys who the man introduced me to saying they were also beneficiaries of the job. I was just about to ask what the job was when a waiter brought me a drink and he told me to give him a minute to bring papers which would show me my job description.

I don't know what happened next. I found myself in an uncompleted building. I was confused at first and felt I was dreaming. But the cold was unbearable to be a mere dream and the sharp pain on the side of my belly was too intense to be real. I saw my shoes on the floor. I was confused. How did I get here? What about the job? Did I loose my chance by getting too drunk? Then I recalled I didn't drink alcohol. I decided to put on my shoes when I noticed my legs were so swollen my shoes didn't size me anymore.

I left the place with no money in my pocket, didn't even know where I was. I tried to ask some Arabs to help but no one even listened to me. As I kept walking, I saw 2 security men and walked up to them. They were Nigerians and after telling them about my plight, they took pity on me and asked me to sleep in the factory where they worked for the night. They gave me some pain killers to relieve me.But advised me to go for a test the next day. The next day I told them I had no money to even go for a checkup and I was probably going to be deported as I had just one week for my visa to expire.

The elderly one told me there was a job opening as a life guard at some private beach. I couldn't be more grateful.

I took up the job but the reoccurring belly ache which I kept suppressing with pain killers was getting more intense. Then after rescuing someone who almost drowned, the intense stress which accompanied that made me fall ill. And after several tests, they couldn't ascertain what was wrong with me. I had used up all the little money I earned from my job as a life guard and I had no option but to give myself up to the authorities so I could be deported since I couldn't pay for my flight ticket.

I returned to Nigeria seriously ill and my parents took me from one hospital to the other and they couldn't detect what was wrong with me. We went to several prayer houses even very popular miracle pastors who claimed it was evil people from my village chasing me. Destiny killers they said. I was ordered to fast for 21 days and four days later I collapsed . Then my father ran into an old classmate who owned a hospital. He told him about my plight and he told my dad to bring me over.

He ordered a full scan to be run on me and while I was alone, he came to me and said" Young man, why did you have one of your kidney's removed?" I was shocked 'My Kidney? Sir I don't get". He smiled"At least if you want to have your kidney removed, do it well. You must have earned a few millions from it so what did you do with the money? Why didn't you treat yourself properly?"""

I was confused and I insisted I knew nothing and he showed me the scan. Yes one kidney was missing. He also said the closure was perfectly done and skin was used to cover up the stitch. He said only Indians did such perfect cover-ups. After insisting there was a mistake somewhere, the doctor said the fact was one of my kidneys was removed and he told me the dangers of selling my kidney which many Nigerian youths do these days to make quick cash I was in tears and I told him I didn't know what he was talking about then I recalled the Indian man I met who told me he had a job for me.

It hit me that that man had me drugged and took me to an unknown place and had my kidney removed and then dumped me in that building.

Now I'm a 26 year old man who put my parents through hell and I'm now living on one kidney and very ill. I keep hoping this one doesn't develop a problem. I want youths to be careful of where they go to and who they interact with.I just found-out its a cartel and several African jobless youths have been trapped and have their kidneys removed without their knowledge.

It's a wicked world.