Did Gerard de Nerval walk his pet lobster through Paris?

Legend has it that the 19th-century French Romantic poet Gérard de Nerval (1808-1855) had a pet lobster named Thibault that he took on walks in the Palais Royal gardens of Paris, using a blue silk ribbon as a leash. When asked why he did this, he replied


Why should a lobster be any more ridiculous than a dog? Or a cat, or a gazelle, or a lion, or any other animal that one chooses to take for a walk? I have a liking for lobsters. They are peaceful, serious creatures. They know the secrets of the sea, they don't bark, and they don't gobble up your monadic privacy like dogs do. And Goethe had an aversion to dogs, and he wasn't mad! 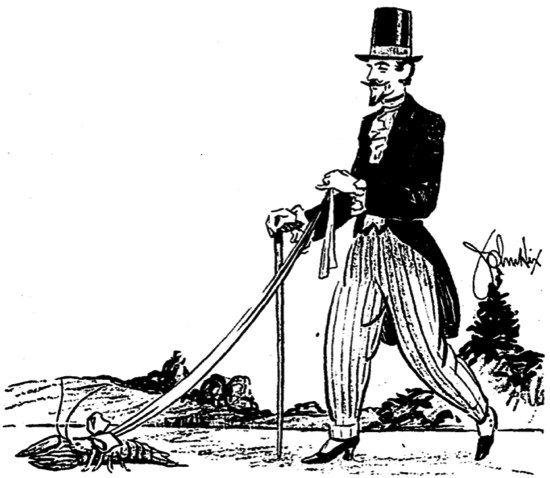 It's an amusing story, but is it true? Did Nerval really take his lobster on walks? Over at Boing Boing, Mark Dery delves into this mystery at length.

First, Dery consulted literary scholars. He discovered that they disagree about the story's veracity. It turns out that the original source of the story was Nerval's friend Théophile Gautier, and one critic, Richard Sieburth, thinks Gautier invented the story as a hoax to "impress the bourgeois." But another scholar, Richard Holmes, thinks the story could be true, noting Nerval had a "well-documented fascination with odd or exotic animals."

So next Dery turned to marine biologists to find out if it would even be physically possible to walk a lobster. The answer, summarized, is that it might be possible, but it wouldn't be easy since a) under ideal conditions a lobster will survive for only 30 or 40 minutes out of water, and b) lobsters aren't designed to walk on land. They can scuttle around, if they're stressed enough, but they don't like doing it. Diane Cowan of the Lobster Conservancy says bluntly, "Taking a lobster for a walk in the park is a cruel and sadistic idea. Please do not even think about it."

And could Nerval even have kept a lobster as a pet at home? To do so would have required "a large tank with relatively cool seawater and it would have needed some kind of aeration." It's unlikely Nerval had any of this.

So the answer to the question of whether Nerval really walked his lobster is that, no, he almost certainly didn't. But Dery offers two other possible explanations for the story (besides the suggestion that Gautier invented it).

Nerval's correspondence reveals that once, during a visit to the coastal town of La Rochelle, he intervened to save a lobster from a fisherman's nets and then took the lobster home with him. Perhaps this was the source of the tale.

Or, perhaps (possibility #2) Nerval came up with the lobster-walking story, but he intended it to be read allegorically. In other words, the lobster that Nerval walked was a symbolic lobster, not a real one. 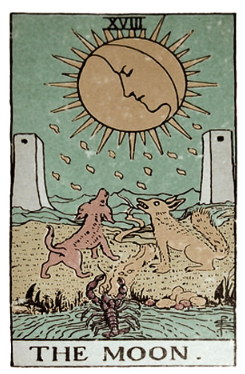 Nerval, Dery notes, was "a fervent scholar of the occult," and lobsters have special significance in some occult sources, such as Tarot cards. For instance, the Moon card shows a lobster crawling out of a pool onto dry land, up a path guarded by two dogs (or a dog and a wolf) toward the full moon. The lobster, in this setting, could be interpreted as a symbol of the animal self struggling toward enlightenment. So Dery asks:


Was the lobster walk—initially dismissed as symptomatic of Nerval's nuttiness, more recently historicized as anti-bourgeois performance art—an occult transmission, broadcast to anyone with a working set of gnostic antennae? Is Nerval's famous quote a compressed meditation, informed by the Tarot, on the importance of balancing the rationalism of industrial modernity and the repression of bourgeois society with the creative energies of the unconscious? ... Were Nerval's barking, ravening dogs the rough beasts of the id, familiar from the Moon card? Was his "peaceful, serious" lobster a Surrealist reconciliation (perhaps even an alchemical or Kabbalistic synthesis) of the Moon's ruminative intellect with "that which comes up out of the deeps," the unconscious?
An interesting idea. It certainly makes me view the B-52's song "Rock Lobster" in an entirely different light.

Perhaps he had a stiff wire in the leash, and caused a dead/fake lobster to 'scuttle' along...