My Lips Are For Blowing 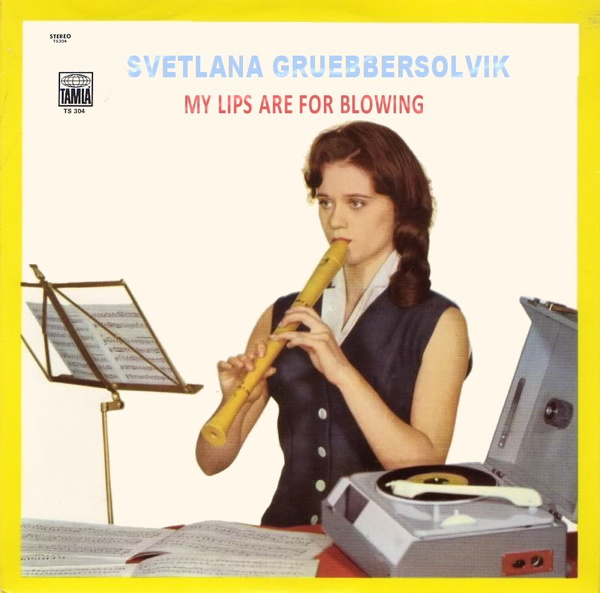 It seems pretty obvious, if you think about it, that the album "My Lips Are For Blowing" by Svetlana Gruebbersolvik cannot be a real album. After all, even if you assume that the name of this album might have been an awkward translation from a Russian original, why would Tamla records (aka Motown) have put out an album of a Russian recorder player?

Nevertheless, the image of this album cover has circulated widely, and a lot of people seem to be under the impression that it's an actual album.

For instance, it recently popped up on the "History in Pictures" twitter feed, with no indication given that it's a fake album.

Last year, Buzzfeed included it in a list of 21 awkwardly sexual album covers, and "The FW:" has named it one of the 50 Worst Album covers of all time (again, seeming to think that it's a real album). The image can be found on many other sites.

For the record (pun intended), there is no such album. Nor is Svetlana Gruebbersolvik a real person.

The mock cover was created and posted back in September 2010 by "Estancia de la Ding Dong" who runs the Twisted Vintage blog. You can find a more specific confession that the cover is fake posted here on Twisted Vintage.

A month later it appeared on the LP Cover Lover site, where the fact that it was a joke album cover was noted.

After that, the image went viral, and that's when a lot of people began confusing it for a real album.

A dead giveaway for typography buffs: the type is set in Arial, which definiitely didn't exist when this record supposedly was made. Furthermore, the setting of the type is awful regardless of font, and at that time typography was still the domain of professionals.
Posted by John  on  Mon Jul 07, 2014  at  05:40 PM
A well-written and informative article.
When I look at it now, it looks pretty shoddy, especially compared to the images I'm making for the New Twisted Vintage.
Museum of Hoaxes looks like a pretty cool site - I'll check it out when I have some time.
Posted by michael mcdonnell  on  Mon Jul 07, 2014  at  08:06 PM
Let's not forget to mention that the woman strikingly resembles Zooey Deschanel.
Posted by Tah  in  Idaho (Yes, Idaho)  on  Mon Jul 07, 2014  at  09:10 PM
Also... Gruebbersolvik? Really?
Posted by Richard Bos  on  Tue Jul 08, 2014  at  04:52 AM
Commenting is not available in this channel entry.