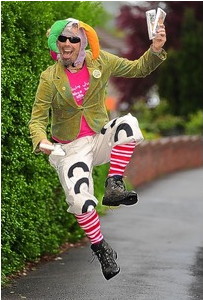 Add this to the satirical candidates file: The guy in the picture was born Eric Mutch. But in 2010 he changed his name by deed poll to "Zero None Of The Above" and ran in the general election for Mayor of Bristol. But he only received 172 votes. He theorized that people didn't understand the point of his name, which was "to give a choice to people who wanted to vote but did not want to give their support to any of the candidates on their ballot paper."

If elected, he promises to "print a local currency and pay an annual unconditional basic annual income guarantee to every Bristol resident of £10,000 Bristol pounds."

If I lived in Bristol, I'd vote for him. Link: thisisbristol.co.uk

Here's my full press release if anyone wants to know more

http://www.thefunrevolution.com/content/press-release-0
Posted by corrupt self serving lying thieving bstard  on  Fri May 11, 2012  at  11:20 AM
And this is my general election campaign 😉