Tah gave me a heads up about this 'Here There Be Monsters' shirt that was the deal-of-the-day at Shirt Woot! 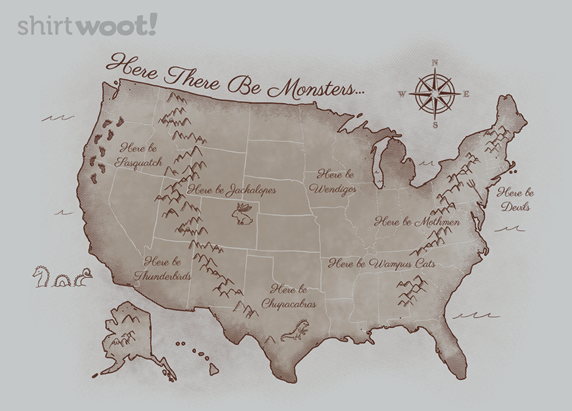 It reminded me that I recently came across a foldout Storyteller's Map of American Myths in the Aug 22, 1960 issue of Life magazine. It's full of strange creatures such as the Arizona Ghost Camel ("once imported by the army, wandered the desert with dead riders), Michigan Tigerfish ("lurking around Saginaw Bay ate cabin boys"), and the New Jersey Mosquito ("as large as a swallow and fierce as an eagle, was trained by the Indians to hunt. One sting could stop a deer in its tracks.")

And the same issue also had a foldout guide to "Yarns and Whoppers and Practical Jokes" that depicts creatures such as the Goofus Bird, Upland Trout, and Shoo Fly.