Since today is the first day of Error Day, this story seems appropriate. Assuming that the story was accurately reported, it demonstrates that the difference between sanity and insanity is often just a matter of context.

The clipping comes from The Sydney Morning Herald - Dec 26, 1884. But I first saw the story over at Brian Chapman's Legends & Rumors blog. 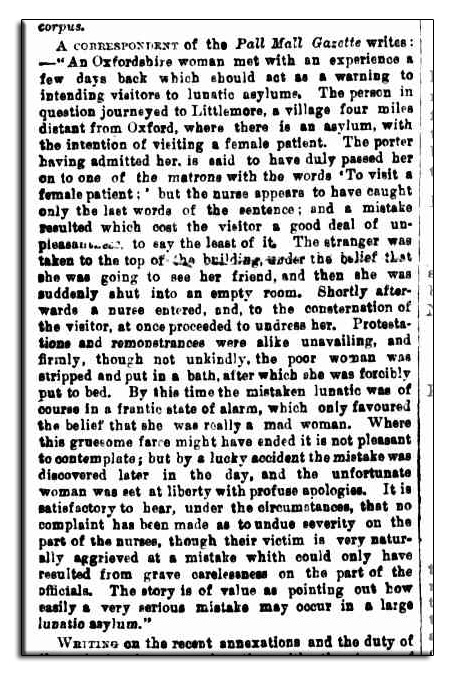 A correspondent of the Pall Mall Gazette writes: — "An Oxfordshire woman met with an experience a few days back which should act as a warning to intending visitors to lunatic asylums. The person in question journeyed to Littlemore, a village four miles distant from Oxford, where there is an asylum, with the intention of visiting a female patient. The porter having admitted her, is said to have duly passed her on to one of the matrons with the words 'To visit a female patient;' but the nurse appears to have caught only the last words of the sentence; and a mistake resulted which cost the visitor a good deal of unpleasantness, to say the least of it. The stranger was taken to the top of the building, under the belief that she was going to see her friend, and then she was suddenly shut into an empty room. Shortly afterwards, a nurse entered, and, to the consternation of the visitor, at once proceeded to undress her. Protestations and remonstrances were alike unavailing, and firmly, though not unkindly, the poor woman was stripped and put in a bath, after which she was forcibly put to bed. By this time the mistaken lunatic was of course in a frantic state of alarm, which only favoured the belief that she was really a mad woman. Where this gruesome farce might have ended it is not pleasant to contemplate; but by a lucky accident the mistake was discovered later in the day, and the unfortunate woman was set at liberty with profuse apologies. It is satisfactory to hear, under the circumstances, that no complaint has been made as to undue severity on the part of the nurses, though their victim is very naturally aggrieved at a mistake which could only have resulted from grave carelessness on the part of the officials. The story is of value as pointing out how easily a very serious mistake may occur in a large lunatic asylum.