The recent death of actor Philip Seymour Hoffman has shone a light on the strange business model of the site Mediamass.net.

After the actor died, reporters googled his name and came across an article on Mediamass reporting that the actor had recently been the victim of a death hoax. So a number of sites (such as The Telegraph and Daily Mail) subsequently reported on what a strange coincidence it was that the actor's real-life death had been anticipated by a death hoax. 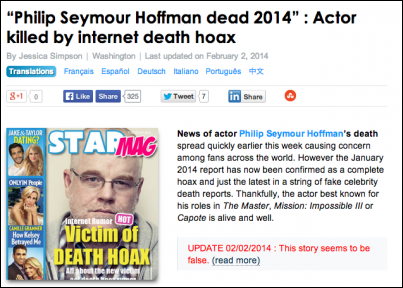 But the reporters had been fooled. What seemed to have been a prescient hoax was actually just Mediamass's anticipatory method of rumor debunking.

You see, the site tries to capitalize on the popularity of celebrity rumors by anticipating rumors that might circulate and debunking them... whether or not such rumors actually are spreading. It achieves this by using generic, automatically generated templates.

So, for instance, it's possible that a death hoax might circulate about any celebrity. So it has pages already generated for all the major celebrities debunking rumors of their death, in anticipation of the day when these rumors might come into existence. The name of the celebrity just gets inserted into the generic template. 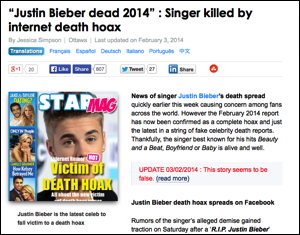 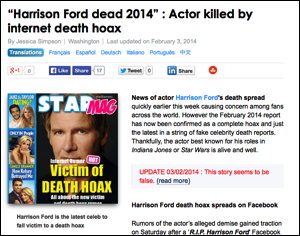 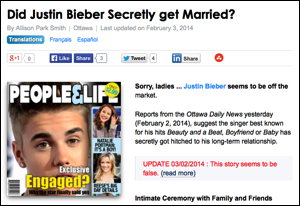 I have to admit, it certainly takes the work out of debunking. Why bother scanning twitter, Facebook, etc. for false rumors, when you can simply generate templates that deny all such rumors before they even start to spread.

And when a celebrity really does die... then Mediamass simply replaces the pre-generated template with a short notice to the effect that this time the report of the celebrity's death was true.