This Day in the History of Hoaxes: May 28 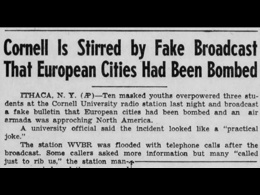 May 28, 1952: The Cornell War Broadcast Hoax
On the night of May 28, 1952, a group of Cornell students disguised by halloween masks raided the campus radio station, WVBR, and began broadcasting news flashes claiming that Russian planes had bombed Paris, Marseilles, and London. The reports initially caused hysteria in the dorms, although most people soon realized they were fake. The Dean of the University later described it as a "lunatic stunt." The students involved were suspended for a year. [Cornell Archives] Skeptic History: On May 28, 1898 the famous negative image of the Shroud of Turin was photographed. http://bit.ly/19WkQ2 On the two hundredth anniversary of his birth (May 28, 1738) a columnist in the London Daily Telegraph wrote that not only did Dr. guillotin not die by the guillotine but he did not even invent it. In the Cluny Museum, this museum declared, is a death certificate proving that Guillotin died peacefully in bed just a few days before he had rounded out a century of life.