This Day in the History of Hoaxes: May 27 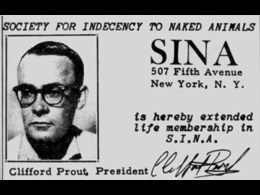 May 27, 1959: SINA makes Today Show debut
Actor Buck Henry, in character as G. Clifford Prout, president of the Society for Indecency to Naked Animals, appeared on NBC's Today Show. As Prout, he urged Americans to promote decency by putting clothes on naked animals. SINA continued its unusual campaign for four years until it was revealed to be a hoax masterminded by Alan Abel. More… Here we go again. Nevermind the Mayans, this minister says Jesus will return May 27, 2012 http://bit.ly/ylCIdp /via @DJGrothe Skeptic History: Planet X (aka Nibiru) failed to collide w/Earth on May 27, 2003. Reason: it doesn't exist. http://bit.ly/cQ0I5A