This Day in the History of Hoaxes: May 26 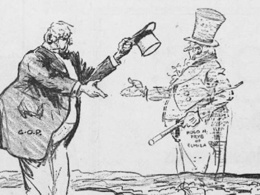 May 26, 1930: Hugo N. Frye Sesquicentennial
U.S. politicians, including the Vice President, received letters inviting them to a May 26 party at Cornell University in honor of the sesquicentennial birthday anniversary of "Hugo N. Frye," who was said to have been the founder of the Republican party in New York State. None could attend, but most replied with letters expressing their sincere admiration for Hugo N. Frye. Unfortunately for them, Frye did not exist. The invitation was a student prank, and Frye's name was just a gag ("You Go and Fry!"). More… Skeptic History: Psychic Sylvia Browne was indicted for fraud May 26, 1992. She got 1 year of probation. http://bit.ly/bF13sE may 26, 2009: bonnie sweeten hoax May 26, 2013: animal planet airs fake documentary about mermaids