This Day in the History of Hoaxes: May 23 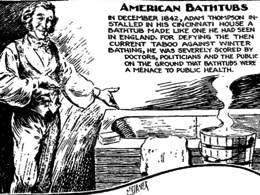 On May 23, 1926, eight years after publishing an article in which he had detailed the curious history of the bathtub in America, the journalist H.L. Mencken confessed that his history was entirely false. His history had claimed that Americans had been slow to accept bathtubs, believing them to be a health risk, until President Millard Fillmore popularized them by installing one in the White House in 1850. But in 1926, Mencken admitted this was all "a piece of spoofing to relieve the strain of war days." His confession had little effect. His faux history of the bathtub continued to circulate widely and to be accepted as fact. [More…]
The Solway Firth Spaceman photograph taken May 23 1964 still remains a mystery today! Real or hoax? #spaceman #ufo pic.twitter.com/evSu4rAifZ