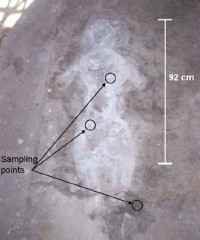 A stain, shaped like a human body, can be found on the concrete floor of the Athens Mental Health and Retardation Center in Athens Ohio. According to legend, this stain marks the location where the body of a patient, Margaret Schilling, lay undiscovered for several weeks back in 1979.

A team of forensic scientists recently tested the stain to determine whether it's a genuine human decomposition stain, or if it was created artificially. They published the results of their investigation in the Nov 2008 issue of the Journal of Forensic Sciences (vol 53, no. 6), "Analysis of Suspected Trace Human Remains from an Indoor Concrete Surface."

Their conclusion: Yes, it's a human decomposition stain, although the stain has been made more prominent over the years by attempts to remove it:


Margaret’s body was probably in contact with the area of the stain for a period of 4–5 weeks. During this time, significant decomposition is known to have occurred, indicating that the room was apparently warm enough to facilitate bacterial degradation. During this time, anaerobic bacterial decomposition could have taken place in the contact areas between the concrete and the heavier, fatty areas of Margaret’s body, such as the buttocks, back and shoulders. Bacterial action is supported by the oddnumbered fatty acids found in the residues. Such decomposition, facilitated by the moisture naturally present in Margaret’s body, formed free fatty acids from the lipids in her subcutaneous tissue. This process may have been accompanied, in part or in whole, by the basic conditions provided through contact with the concrete. During the 4- to 5-week period in which the free fatty acids were being formed, and in any subsequent washing over the years, at least half of the sodium ions were displaced by calcium ions from the concrete. The result is a waxy residue of mostly calcium palmitate which is up to 2 mm thick in certain areas of the stain.In most areas of the stain, the waxy residue also resides in surface pores in the concrete, consistent with the suggestion that removal of the stain was attempted on at least one occasion.

At some point since the removal of Margaret’s remains in January of 1979, the floor has likely been treated with an acidic chemical— probably Blu-Lite (20.5% phosphoric acid)—to lighten the color of the waxy residue and of the concrete. The chemical etching was not uniform across the entire floor surface, however, but was selectively restricted to a shape that resembled the apparent outline of a human body.
What a great way to be remembered -- by the stain you left on the floor. (via Legends & Rumors)

Creepy....
Posted by Maegan  in  Tampa, FL - USA  on  Mon Jul 27, 2009  at  08:42 AM
Agreed. *shudders*
Posted by Smerk  in  to mischief  on  Mon Jul 27, 2009  at  08:49 AM
Yes, but how many people don't even leave that impression behind when they depart this world?
Posted by RichmondTom  on  Mon Jul 27, 2009  at  11:43 AM
how exactly does a patient body lay on a floor rotting ina hosptial for four weeks without anyone noticing?
Posted by T  on  Mon Jul 27, 2009  at  03:23 PM
T, that's what I would like to know.
Posted by Razela  in  Chicago, IL  on  Tue Jul 28, 2009  at  01:13 AM
From the article:
"On December 1, 1978, 53-year-old Margaret Schilling
Posted by Anaglyph  on  Tue Jul 28, 2009  at  07:40 AM
Cripes. You'd think a "team of forensic scientists" would have something better to do with their time. I once smeared a White Castle cheeseburger across the windshield of my brother's car, and even after repeated washings, that area continued to bead water for the life of the car. THAT's what the scientists should be studying- the half-life of murder-burgers. Yeah, that's the ticket. Yum
Posted by Hairy Houdini  on  Tue Jul 28, 2009  at  10:40 AM
Wow, to heck with rain-x, I'm smearing on some white castle - thanks Houdini!
Posted by Kristen55  on  Sat Aug 01, 2009  at  01:02 AM
hey some of you need to remember that science can't explain everything and some things are just creepy
Posted by wegenera  on  Mon Sep 07, 2009  at  04:10 PM
the reason that the white castle burger smear repelled water is exactly the same as the reason the decomposing body left its shape on the floor. there are microscopic pores in all glass surfaces, and like rain-x, the fatty acids from the meat product in a white castle burger fill the pores in the glass. the result is a surface with diffrent molecular structures than the surrounding glass, and because fatty acids tend to be hydro-phobic, the water is repelled. if they were hydrophilic, then of course, the water would stick to that area.
Posted by john doe  on  Sun May 01, 2011  at  04:46 AM
Commenting is not available in this channel entry.