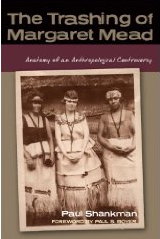 A new salvo has been fired in the ongoing controversy about whether the anthropologist Margaret Mead was "hoaxed" during her research in Samoa in 1925. I've got a brief article about the controversy in the hoax archive. To summarize: Mead traveled to Samoa, interviewed some teenage girls about their sexual behavior, and concluded that Samoan culture had very relaxed, easygoing attitudes about sex. Almost sixty years later Derek Freeman challenged her findings and claimed that the teenage girls had told her wild tales, which she had been gullible enough to believe. Freeman's claims were partially based on the testimony of one of Mead's interviewees, Fa'apua'a, whom he tracked down in Samoa.

Paul Shankman has now written The Trashing of Margaret Mead in which he comes to Mead's defense. Skeptic.com has posted an excerpt from his book. Shankman argues:


Freeman stated his argument so boldly and presented it with such certainty that it seemed believable. In fact, it seemed foolish not to believe him. Almost no one thought that it might be a good idea to look at the actual interviews with Fa’apua’a and to ask if Freeman’s certitudes about the value of her testimony were warranted. These unpublished interviews with her demonstrate that there is no compelling evidence that Mead was hoaxed. It was a good story — a story that many people wanted to believe. Alas, it was a story that was too good to be true.
(Thanks, Joe!)

Hoaxing anthropologists always has been a joy for interviewed people. Or sometimes, it is a result of the circumstances.

When anthropologist Napoleon Chagnon started his work with the Yanomam
Posted by LaMa  in  Europe  on  Tue Dec 22, 2009  at  02:59 AM
So when Chagnon visited another Yanomam
Posted by Klimmzugstange  on  Thu Dec 24, 2009  at  09:58 AM
My best friend is very well acquainted with the Tahitian and Samoan cultures. He has lived there quite extensively and had studied their languages and culture. He maintains that much of what Mead wrote is accurate and inciteful, but also insists that Mead largely saw what she wanted to see when it came to many specifics of Samoan sexuality--her claims there simply don't align what he learned and observed.
Posted by Joe  on  Thu Dec 24, 2009  at  04:19 PM
But is he talking about the same time period as Mead's work? If you were to compare the social mores of 1920s Europe with the modern day, you'd similarly find some commonality, but an awful lot of things that "don't align."
Posted by Dumbfounded  on  Thu Dec 31, 2009  at  07:20 AM
This story is indeed to good to be true.
Posted by CassieTaylor  on  Mon May 31, 2010  at  04:28 AM
Mead is about as respected in the actual anthropology community as Rod McKuen is in the poetry community. If that gives any idea.
Posted by wial  on  Fri Aug 13, 2010  at  07:44 PM
Commenting is not available in this channel entry.